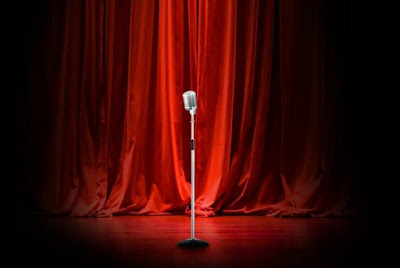 I had the pleasure of writing a feature-length article on a community theatre for a local magazine, and it inspired me to think about how much I love theatre once again. I have my mother to thank for this, as she took me to see traveling Broadway shows like Hair at age 12 (yes, they were naked; no, I didn't freak out) and Joseph and the Amazing Technicolor Dreamcoat at age 14 or so (yes, the one with Donny Osmond; no, I didn't get to see him because it was his understudy that night.) I've been told so often in my life what a performer I was as a child, and I see that same reflection in the little clone I gave birth to a couple of years ago. It's funny, though, that in the past decade and a half since I was on a real stage for the first time, I've become much more comfortable -- and joyful -- behind the scenes.

If you knew me in high school, I was awkward both socially and in the looks department, so I tended to stick with people I trusted not to make fun of me. (I think there were like, three of them.) I took Theatre Arts my freshman year and would have taken four years of it if they hadn't pulled it from the curriculum immediately after I fell in love with it. On the stage, I could be someone else. It was okay for people to look at me, because I wasn't "me". I was a particular character. If I screwed something up, I could play it off as though it were on purpose. But being in front of a crowd as Stephanie was, and is yet, highly uncomfortable for me.

The following year, I joined choir. I was myself, yes... but in a sea of people, so it was still safe to be on stage. Since there were voices much better than mine, I didn't get a solo until my senior year, and the fears that ravaged me then are the same ones that ravage me now whenever I stand as myself in front of a large group of people who are all looking to me to entertain them, educate them, or inspire them. Yet:

I've been a teacher at both the high school and college levels.
I am a minister, giving messages at least once a month.
I sing -- it's rare these days, but it still happens upon occasion.

However, I get the most happiness out of what I do in the background. As a director in theatre, as a writer on this blog for my ministry, and as a mentor to students overseas who will likely never see my face a single time in their lives. I like this because I've come to the conclusion that MY life... is not about me.

Helping others to reach their potential is the reason I'm on this Earth. Sure, I have dreams and aspirations of my own... but they mostly have that common thread. The book I want to write? It's to help others learn to love themselves and to love other people. The child I gave birth to? It's to be able to help him grow into a good human being from the moment of his very first breath. The man I married? It's to help him achieve his highest calling in life. I've been given the ability to encourage and support up to 25 high school students a year from a completely different country while teaching them necessary skills for college in the United States. It's not about me. It's about the One who placed me where He placed me, and the people into whose lives I have been woven by Him.

I used to want to be famous. This was because I figured if I were famous, people would have to like me. Now, I couldn't possibly care less if people like me or not. I have a life to live, a purpose to fulfill, a journey to trek. Sometimes I love it. Sometimes I hate the world and everything in it. Some days I'm full of joy and ambition. Some days I don't want to get out of bed. But every day, I learn something new, experience something new, grow a little bit, and find the strength to keep on moving.

Contrary to the Hokey Pokey lyrics, THAT'S actually what it's all about.