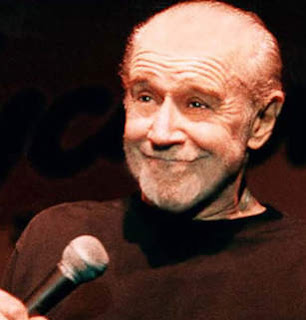 "A house is just a place to keep your stuff while you go out and get more stuff." --George Carlin

Did you ever just sit in the center of your room, whatever room you're in, and stare at all the stuff around you? Because, seriously, I don't need all this stuff. I have Disney movies on VHS. I don't even own a VCR. [Note to young'ns: A VCR is something that came before Blu-ray, even before DVD, and it played these big blocks called VHS tapes and, if your parents are as old as I am, they might have had a Betamax player before that...] I have literally hundreds of CDs and DVDs, and never listen to anything except Pandora online and never watch anything but streaming shows or movies on Netflix, Hulu, and the like. But there's something that keeps saying I should keep it. Why? They're not a collection, nor are they 'collectors' items'. None of them are worth anything, even the $10-$20 apiece we originally paid for them. They might glean a buck or two at a yard sale. But they take up a tremendous amount of space in our tremendously large for the three of us house, and collect dust that I complain about on the two occasions per year that I dust.

I have candles, and mugs, and magazines, and trinkets, and whozits, and whatzits, and so many things that I feel like I'm in a Dr. Seuss story sometimes. We have a collection of vinyl and a record player that gets used maybe once a year. [Note to young'ns: vinyl is... ya know what, never mind.]

WHY do I have so much stuff?

I never watch the news. The news is depressing and reinforces all the negativity in the world and I want to focus on the positives. But I'm aware, believe me. I'm aware of all the horrible things going on. The fact that even the poorest in our country are rich when juxtaposed against the backdrop of poverty and starvation in other countries. I know there are children out there just a little older than my baby that are dying because of something that my child was routinely vaccinated against in thirty seconds or because they don't have a clean water supply or any way to bring down a raging fever.

I look at my meager pay for the year, the fact that I'm on Medicaid and WIC, the coupons that I cut, the bills that I have to pay each month, and the programs that I'm signed up for just to make ends meet and I think... wow.

I am so incredibly lucky.

I don't pity myself for being in this position, nor do I take for granted the aid that I'm relying on at this time. Because I know that I am rich. I am, in someone's eyes, living in a palace filled with baubles and I sit back and feel horrendously guilty.

I have food, I have clean water, I have a roof over my head, and the love of my husband and my family.

Everything else is just stuff. And I don't need all this stuff.

What can you and I do to eliminate stuff and help someone who really needs it? That's my goal for the year. Won't you join me?