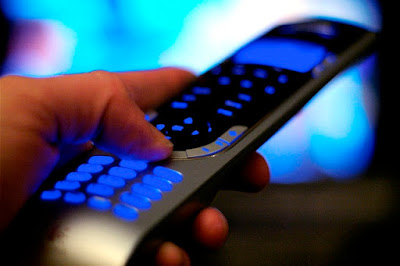 The struggle over the remote control used to be very real. It would be in my hand and then, suddenly, it wasn't -- because my husband took it. As though it were his God-given right to have ownership over the remote control. I protested, grabbed it back, hid it when he wasn't around, argued about it like it was the last can of Pringles in a bomb shelter. And then, one day, I just gave it up. I was sick of the struggle, of the stupid, pointless fights, of the tension... I just stopped trying to get and keep control of the remote control.

Now, there are times when I'll pick it up (when he's not home) and then I have no problem putting it back down when he shows up. This isn't a diatribe on the distribution of power in our marriage, don't get me wrong. It's a reminder to us all that control isn't really important because we don't truly have it anyhow.

I LOVE statistics. I mean, I love them. I took a stats course my senior year in college as a blow-off class to pad my GPA and aced it. But I used to debate weather statistics with an old friend on purpose to irritate him. There's a 70% chance of rain, he'd tell me. No, I'd counter, there's a 50% chance. And back and forth we'd go because he was certain he'd heard on the news that it was 70%. I'd say, you may be right but the real statistic is 50%. It's either going to rain, or it's not. He'd become irate, I'd laugh like crazy, and we'd have the conversation again the next day.

It's the same thing with events in life. Something is either going to happen or it's not. Sure, we can plan ahead, we can try to control the outcome of a given situation for better or worse, and we SHOULD do our best to work toward a positive outcome. But, in the end, we have to give up control and let what will happen just happen. You can advise a friend not to cheat on her husband, but you can't NOT cheat on her husband for her. You can raise your children a certain way but it doesn't guarantee they'll make the same choices when they're adults, and we have to be okay with that. You can do everything right and, sometimes, the wrong thing will still happen.

That doesn't mean we shouldn't try. It means we need to learn when to give up control.

By the same coin, you can't spend your life being indecisive and apathetic, either. Taking the stance of leaving everything up to 'fate' or 'God' or 'the Universe' without attempting a positive outcome just ensures that we'll wind up disappointed and regret later that we didn't try.

The trick is to be able to have that unconditional love for our family, ourselves, and all others. True love has no conditions. It's not just tolerant, it's exuberant. It's not just accepting, it's inviting. When we can look at our day, our situation, and try our best but still be willing to say that whatever happens will work out for the best, that's when we've got it right. The truth is, it IS under control.

Just not always ours.