Don't Be That Guy 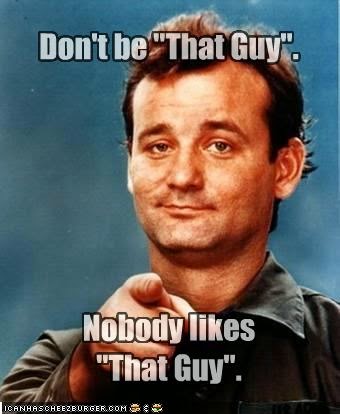 Don't be that guy.

You know, that guy nobody wants to hang out with because he constantly complains all the time, about absolutely everything? You never feel good when you're with him, you just feel like you're being totally drained of all happiness simply because he opens his mouth? If you say something good, he finds a way to turn it bad or worry or warn you about any or every aspect of whatever it was you were happy about to begin with? You know, that guy who, just by showing up to a party instantaneously makes it the worst party ever, or you spend 95% of your energy at the party avoiding him so you don't have to be sucked into the black hole of negativity? He mopes, whines, tells depressing stories, gives doom-filled statistics, and seems to have no hope whatsoever for anything at any time?

Don't be that guy.

But, you know that OTHER guy, the one who smiles every time he sees you, whether he's just finished a ten-mile run and is exhausted, or has the flu, or his dog just died? That guy who builds you up and encourages you even when you don't have any energy left or you feel like nobody is listening, and nobody cares? That guy who always answers the phone when you call and listens to every word you say, not just waiting for his turn to talk, but REALLY listens? The one who takes your negative statements and finds a way to make them positive, to give you hope and support every step of the way? You know that guy who writes you a note out of the blue and emails it or posts it on your Facebook page just to tell you that he thinks you're great and lists all of the reasons why? That guy who everybody wants to talk to at the party because he never says a single bad thing about anybody, ever? The one who wants to hear about your dreams and then helps you make a plan to make them come true?

If you change your way of thinking, talking, and interacting to a more positive mode, you'll be surprised at what you can accomplish and what others will want to help you accomplish. That's what we're all about here on the Journey -- helping each other take steps, small or large, toward their goals. Becoming better people -- more positive, hopeful, and full of joy and contentment. We're in this together, and we're not going to let each other down or put each other down.

Thanks for being a part of it!
Stephanie Jean
Posted by SJS at 9:48 AM