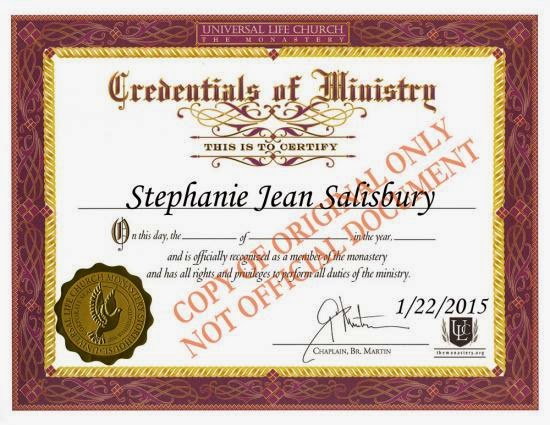 Yesterday marked an important day in my own Journey. I finally became an ordained minister and my credentials are on their way. I'm not a different person from the one I was on Wednesday, and this doesn't make me any more special than anyone else. But it's important to me, and it was (believe it or not) a big step for me to take.

I know a few people who have done the same thing as I did: clicked on the link, typed in their name, and were instantly ordained. I know there's a difference between studying in seminary school and typing your name in a box. I do. But I also believe that when you feel called to do something, you need to do it. Even if it sounds ridiculous, or pointless, or ordinary. There's something about taking a step in the right direction that makes the ordinary extraordinary.

I've been thinking about doing this for quite a long time, actually -- over a year, at least. I'm not sure why I hadn't yet but I'm pretty certain it's because the timing wasn't yet right for me. I don't believe in coincidence, as you might know if you're an avid reader of this blog. (All two of you. Both of whom I appreciate. Greatly.) So when an acquaintance of mine with whom I worked a few years ago for a very short time popped up with a question for me, needing someone to officiate her wedding, I put some feelers out for my 'go-to' guys in this area, but none of them panned out the way they should have if it were meant to be. The first thought that jumped into my head was, 'Well? What are you waiting for?' and I told her that I'd been contemplating getting ordained myself so if it didn't work out with the others, I might be able to perform the ceremony on her date in a few months.

I know, it doesn't seem like that big of a deal, right? Because YOU could go do it right now, with no forethought, no prompting. But it was a big deal to me. When I left that job a few years ago it was because I was feeling compelled to leave. The money was good, the work was what I'd 'always wanted', but I just had a bad feeling about it; it felt toxic to me, every day. One of the last exercises we did while I was there was to write out what we would want someone to say at our funeral. I kept my tiny scrap of paper because that was the moment I knew I wasn't supposed to be there anymore and made up my mind to leave as I'd been feeling called to do. Everyone else's paper had something about business or money or legacy on it (none of which were bad), but mine stuck out like a sore thumb, talking about how God's words would work through me to make a positive impact on people's lives.

I'm not a writer because it makes me incredible amounts of money. None of my three jobs do that. I'm a writer because I feel like that's my ministry. Using the words God gives me to encourage, help, reach out, bring comfort to, and otherwise 'minister' to people. So it only makes sense that I should have a certificate that says that's what I am, right?

Every day, I'm one step closer to figuring out the 'why am I here' question of purpose that most of us contemplate at some point or another. Granted, I might not ever fully be cognizant of the reason but it's the step-taking that matters.

That being said, I can now officiate weddings -- the man/woman kind or the same-sex kind if it's legal in your state (which, if it's not, I'm hoping it will be soon.)

Thanks for walking with me on my Journey. I'm happy to be on yours with you as well.

Stephanie Jean
Posted by SJS at 10:51 AM