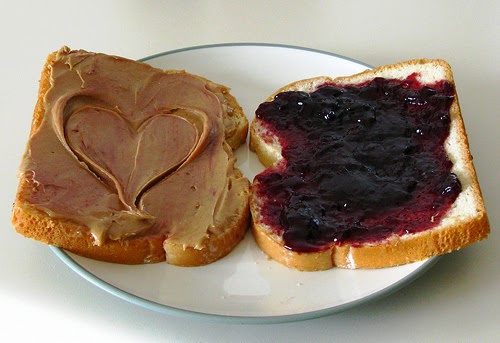 When I was in elementary school, I didn't take hot lunch. It was too expensive and I was (and still am) quite possibly the world's pickiest eater so, for me, the perfect lunch involved a brown bag with some potato chips or cheese crackers, a chocolate pudding, and a peanut butter and jelly sandwich on white bread with my mother's homemade black raspberry jelly. To this day, it is the only jelly I will eat. This is the reason my mother must become immortal. It's that good, and no one can replicate it. Not even me.

So delicious was this sandwich that I would devour it with complete abandon, the gusto of my gigantic bites not shying away from the fact that my entire face from nose to chin on the vertical and ear to ear on the horizontal was covered in a dark red goo (or, as I refer to it in my brain these days, the nectar of the gods.)

There were some other kids that would sit nearby giggling at me, calling me "Jelly Face", and I just didn't care one bit. My love for this food overshadowed any derogatory term the other 7-year-olds could muster. My mother was a genius with a brown bag lunch, and they were just jealous. I often was sent to the bathroom to wash up after lunch BEFORE recess, if that tells you what a mess I made of myself (though, in retrospect, the teachers could have been predetermining the mess I would become if the sticky face came in contact with the dusty ground...)

Then there were the traders. Not traitors, mind you -- that's a completely different thing. These were the kids who also brought brown bag lunches, but the mothers of whom were not as culinarily gifted as mine. A thin sandwich with store-bought jelly or, worse, no jelly at all, on some dark, disgusting-looking bread. VEGETABLES in a baggie. An all-natural juice pack. I pitied them, no doubt, but darned if I was going to fall for their sunken eyes and disappointed frown. They'd try to pawn off their mess-in-a-sack to me in the hopes of gleaning my delectable sandwich, pudding, and chips with two words, sometimes in question form as though just testing the waters but not really believing it to be a possibility:

Not on your life, my friend. Usually my mouth was too full to answer verbally, so I'd just shake my head and keep chewing while they tried the next victim. Sometimes they'd get a pity cheese from someone who had two strings in their bag, but usually they were stuck with their original offerings and, often, the bag ended up in the trash, contents uneaten, while the kid bought a Pudding Pop from the ala carte menu and sauntered out to the playground.

My lunch was too good to give up. It was the. best. thing. ever.

It's funny that, as I grow older, I'm surprised at what can be traded. There was even an entire television show dedicated to trading 'up' to get cooler items. Keep trading and you'll start off with a broken bicycle and end up with a classic car, just by making incremental deals that are to your benefit. I even recently brokered a very nice used bicycle for my son by putting up part cash and then trading a used piece of exercise equipment that I'd been trying to sell in every yard sale I've had for the last five years or so. People trade services for other services, like a housecleaning for a massage. They trade homemade items for other homemade items from people with different skillsets, like home-brewed beer for knitted sweaters and crocheted scarves. But it's a rare occasion indeed where you see someone that has something absolutely, incredibly UNBELIEVABLE who will trade it for something that's completely worthless.

In fact, it's only happened once in the history of humanity.

We live lives that are full of mistakes. We fail constantly, even to our own standards. We try to do right, we try to be good, we try to balance and control everything. But we are unbalanced and out of control most of the time anyhow, if we are being honest with ourselves. We hurt people, we hurt ourselves, and we hurt our Creator.

But 2 Corinthians 5:17 says something pretty powerful:

"Therefore, Jesus took his amazing lunch, looked at your pathetic one, and said, "Trade ya!" --SJS Version, 2014

Okay, those aren't really the words. It's even better than that.

"Therefore, if anyone is in Christ, the new creation has come. The old is gone! The new is here!" --NIV

All of our mistakes are covered before we even make them. He traded His perfect life for our messy ones. His death and resurrection ensured that we can 'trade up' for the rest of our earthly lives. Does that mean we can skim by in life and do whatever we want? Of course not. It simply means that we are taken care of and forgiven for our failures if we are 'in Christ'.

What does it mean to be 'in Christ', though?

It means, you're on the Journey. You're seeking. You're learning. You're changing, and turning around, and taking steps in the right direction. There's no set rulebook you have to perfectly follow in order to be a follower (nope, not even the Bible... we CAN'T follow it perfectly, that's the whole reason for Jesus in the first place!)

It means you should just make the best lunch you can and Jesus will trade you His better one for yours, no matter what it looks like. His is even better than my mom's.