Footblog #5: Beware the Underdog! (A Lesson in Humility) 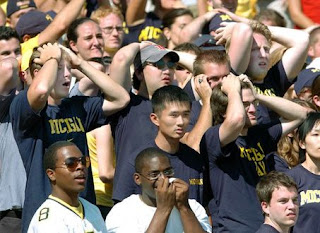 I perched on the sofa, one foot on the floor and the other curled up underneath of me, ready to pounce at the television screen at any given moment. All week long, I'd heard from fans, friends, and fools how lousy of a team Akron was, how easily we would beat them, how simple of a schedule we had for the rest of the season. It's convenient and comfortable, sitting up on this high horse after beating Notre Dame and then going on to a team like Akron. Have you ever even heard of them!? Well, if you have, you'll know that before playing my Michigan Wolverines this past weekend, Akron had only won FOUR of their last THIRTY-EIGHT games. That means that, when playing, Akron wins less than 11% of the time. So, what are the odds they were going to even score against the great Wolverines? They should be happy -- no, they should be honored -- to even be playing in the Big House, which seats 107,501 people (not counting the people who aren't seated, which usually adds up to another thousand or two or three...). The population of the city of Akron isn't even twice that. Seriously.

We are better than they are in every way, and they're embarrassing us.

Here are some things I didn't think about:
The joy they must have felt at being the underdog and being able to score any points at all.
The thrill of being able to stop the offense of such a legendary team.
The elation at being able to wind their way through the Michigan defense in their own stadium.
The happiness they received from proving themselves more than just an underdog in front of over 100,000 fans of the opposing team.
The pride their coach must have felt in not only a game well-played, but a game-well played against a force to be reckoned with.

Are we going to play the game with such haughtiness that we allow ourselves to slip? That we look down on others as not being good enough? That we scoff at the efforts of anyone else because we're so prideful that we think we'll always come out on top no matter what? Are we just going to phone it in instead of giving it our all? Are we going to wallow in our arrogance every time something doesn't go the way we want or expect it to? If that's how we play, then we're in for a big surprise, and a great deal of humiliation eventually.

"Do nothing from factional motives or prompted by conceit and empty arrogance. Instead, in the true spirit of humility, let each regard the others as better than and superior to himself [thinking more highly of one another than you do of yourselves]. Let each of you esteem and look upon and be concerned not for his own interests, but also each for the interests of others. Let this same attitude and purpose and [humble] mind be in you which was in Christ Jesus..." Philippians 2:3-5 [AMP]

Because, in the end, if we play the game the right way? Everyone wins. Even the underdog.