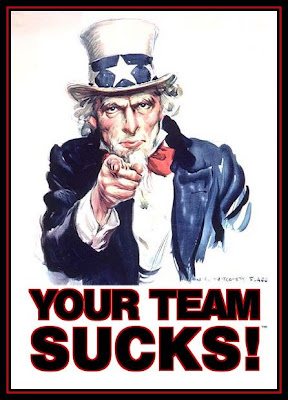 First off, let me just say "Hail to the Victors", because this Michigan fan couldn't have been happier with the outcome of this weekend's game. Well, I guess I could've been happier if our QB hadn't tossed up a safety only to have it become a full-on TOUCHDOWN for the other team, but... a win is a win, even if it's ugly in there a little, right? GO BLUE!

I'm wary of trash talking before the game. It's not that I have an aversion to building up my team (or even putting the other team down, for that matter)... for me, it's a matter of 'later dignity'. I'd hate to build up the awesomeness of my Wolverines only to have them fail me. I'd also hate to run another team through the mud when that team might end up being victorious in the end. I certainly don't want to have the other team's fans all up in my face when all is said and done, laughing and pointing and making fun of me because I was so haughty. And, there's the part of me that doesn't want to hurt anyone's feelings. (It's a really small part, though... I'll definitely trash talk AFTER the game is over and I win, particularly if you tried to trash talk ME before the game. Because, haha.)

It's all fine and good in football, but I've noticed there's even trash talk in religious circles, and I'm not talking about sports, either. Often, one religion... or even one denomination... spends a great deal of time 'bashing' another one, or calling out all the reasons they're better than the other. Not only is that not necessary, it's not right. Most of the time, this kind of trash talk comes from a lack of understanding of the other person's viewpoint. So much would be accomplished by sitting down and talking to, and learning from, one another. When we're talking about different religions, if you feel passionate about yours and want the other person to understand it more thoroughly, you're certainly not going to accomplish that by pointing out all the flaws in their religion. And, within the same religion, you won't 'win any points' by telling others what's wrong with their viewpoints and why yours are superior.

Let's even take it to a one-on-one basis. Regardless of religion or viewpoint, the old saying, "You catch more flies with honey than with vinegar" still holds true. The only way you're going to influence people toward worshiping your God is to show them what's different in your life because of it. Since actions do, indeed, speak louder than words, stop trying to talk people into it. Stop trying to point out what's wrong with their lives, and what's right with yours. Start using compassion, start caring, start giving and loving and being kind. Believe me, they will notice what's different about you, and they will come to YOU to ask about it. Not in so many words, probably, but they will most definitely want to spend more time around your positive energy and, in the process, you'll have the opportunity to show them why you are the way you are.

For me, it's Jesus. My life changed dramatically when I experienced His love through the love of someone else. It wasn't that person telling me what was wrong with me (because, let's face it, I already knew.) It wasn't that person telling me I needed to change. It was that person loving me like Jesus does, loving me as the flawed, failed woman that I was (and still am), and it made all the difference in the world. It made me want to change. It made me want to be better. It made me start on this Journey and never want to stop.

In the end, the victory is there... there's no need to trash talk to gain it.