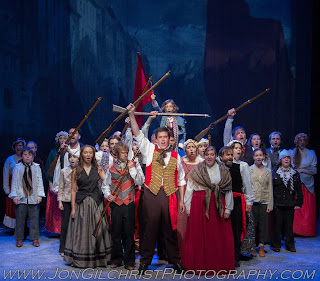 "To Love Another Person is To See the Face of God."  --Victor Hugo

Since May, I have spent nearly every waking moment either at the theatre, thinking about the theatre, rehearsing songs for the theatre, learning lyrics for the theatre, and theatring theatre for the theatre. Les Miserables at South Bend Civic has just become the highest grossing show of all time there, with three additional performances being added after the run began, and with every single performance selling out and receiving a standing ovation. This girl was blessed and honored to be sharing the stage with some phenomenal people, most of whom you can see in this photograph by Jon Gilchrist Photography, but one in particular whom you cannot:

My husband, who played the dynamic, compelling role of Jean Valjean. My husband, of whom I am so proud, words cannot express it.

This show was an emotional rollercoaster. For those of you who do not know the story, it is possibly the most beautiful allegory EVER of what true Christianity looks like. Jean Valjean, a convict who stole a loaf of bread to feed his sister's starving family, spends nineteen years doing time for this crime and for trying to escape. When he is finally freed, he's treated despicably by everyone with whom he comes in contact because he has to show his prison papers for the rest of his life wherever he goes to find work. A kindly bishop takes him in and, thinking of himself first with no other option in sight, Valjean steals the silver from the table and runs, only to be brought back to the bishop by the police. Instead of condemning him as everyone else has, the bishop tells the police he gave these items to Valjean. When they leave, he shows Valjean another way of life -- the path that God has for his soul. Set against the backdrop of the French Revolution and interwoven with some other tales of love and misery, Valjean turns his life around and truly learns what it means to love unconditionally, to put others above himself, to dedicate his life to the right path. It's everything we believe in, and everything we're striving towards here on the Journey.

Tears were shed daily. Watching the audience be moved by the lyrics and the presentation was one thing, but really feeling it inside was another. At the beginning of the rehearsal process was my sister's two-week stint in the hospital where she almost died. Another cast member's engagement was broken off during this time. Another cast member's father-in-law was diagnosed with cancer, another cast member's uncle has a partner who was on his deathbed, another cast member tore his Achille's tendon and was unable to perform the last three shows, and much, much more. Together, we got through everything with flying colors, a tremendous amount of prayer, and a lot of love for one another.

How can a group of 40+ people get so close? I'd love to say theatre is always that way, but it's not. So often, there are cliques and drama queens and backbiting and gossiping and general pain-in-the-rear divas. But this cast was different. Sometimes we cried with each other, sometimes we celebrated, and most often we just came together for a common cause: love.

Our director dedicated this show to his wife whom he lost a few years back to cancer -- he had directed a high school version of it, and it was the last show of his that she saw, saying it was his best work yet. Keeping that in mind, and watching his passion for what we were creating together on stage, how could we help but be inspired? So often, people would ask my husband 'How does your voice hold out?' The answer was, it just does. When something is meant to be, it's meant to be... and it's beautiful.

Though I'm in the midst of a million different things including A Journey of Reinvention's first official hands-on project, an ambitiously large local cloth diaper ministry (see the Facebook page for details!) I needed to take some time to quietly thank each and every person involved in making this show a success this summer. I've made some incredible friends that I know will last a lifetime and I truly believe that we all cross one another's path for a reason.

I love you all,
Stephanie Jean