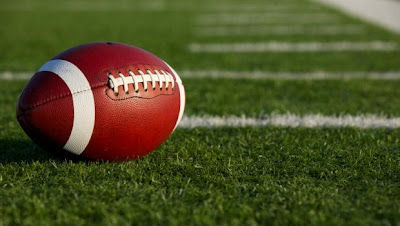 The countdown to kick-off is now two days. I wait all year long for this, very impatiently, and when it comes right down to it, I'm so giddy I can barely stand it. I might appear calm on the outside as you have a conversation with me, but inside my head I hear about 30% of what you're saying and the other 70% is filled with "Foooootball. Go Blue. Wolverines. Fooootballllllllll...." So that blank stare I have on my face from time to time? Yeah, you can blame that on the little oblong brown and white thingy there. It's evil, I tell you. But oh, so good at the same time.

Therefore, with the anticipation of the next 50.5 hours before kick-off (yes, I have it down to the hours), let me make a few remarks about anticipation.

Anticipation brings with it connotations of hope and expectation. When we look forward to something, it brings us joy. In my estimation, the opposite of anticipation is dread. With dread, you know something is coming but it carries negative connotations instead.

Anticipation is a great deal like faith. We have positive expectations of something that has not yet happened. Just like I constantly hope for the National Championship Season each year, I also hope for peace, for joy, for the best life for my family and friends that they could possibly have. Having faith in God, then, is like rooting for a team that can't lose; even when things look glum and hopeless, faith teaches us to look beyond that, excitedly anticipating the time when victory occurs and we run wildly onto the field, embracing each other in a jubilant happy dance, and pouring Gatorade on our coach's head. (That's considered anointing someone's head with oil, right? Hey, the analogy works. Just go with it.)

Hebrews 11:1 says, "Now faith is the assurance of things hoped for, the conviction of things not seen."

That word 'assurance' is a pretty big deal. We're constantly looking for assurance. If I could have ASSURANCE that we'd have a National Championship Season, that would be huge, right? A lot of this is perspective, too; though we might not have the astounding winning season each year that I'd like to have, we might end up with an overall winning record in the next hundred years. We may not win every battle, but we win the war in the end.

So, while I sit here in my Maize & Blue t-shirt, eagerly awaiting my sofa-tailgate on Saturday with snackies and drinks, I'll also be anticipating something else, like I always do:

"And if I go to prepare a place for you, I will come again and receive you to myself so that where I am, you may be, also." -John 14:3

Because it's great to know that even when this world drags me down, even when I fail, even when others fail me, even when I'm exhausted, when I have no money left at the end of the bills, when I am talked badly about, when I'm depressed, when I've been betrayed, when I lose someone I care about, when I'm sick, when I'm so weary of this life that I can't think of any reason to go on... there IS a reason. There will be a day so great that everything I've been through will be worth it, and will pale in comparison to the rest of eternity.

THAT, my friends, is anticipation.