What Wouldn't Jesus Do? 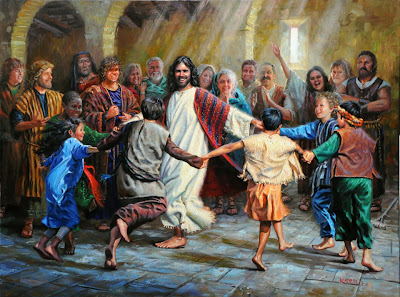 I have some problems.
(Stop that laughter. I know what you're thinking. I meant ACTUAL problems, not 'this chick is crazypants' problems.) I'm fearful of a little phrase that was ever-so-commonplace a few years ago and is still spouted from time to time even now. I'm fearful of it because I don't think many people really understand the repercussions of it. But I also have found that fear is of no use -- understanding is. Are you ready?

What Would Jesus Do?

I agree that we should ask ourselves that question on a regular basis, but I don't think it should be a catch phrase. Instead, we need to have some real introspection into the design for life that Jesus left us. We shouldn't be so quick to place our ideas of what we WISH Jesus would have done into the mix. We need to step back and take a good look at the books of the bible that actually discuss His actions and His words, and base our plan of action upon the words we read.

Another way to go about it is to look at the question 'What WOULDN'T Jesus Do?'. I'm not talking about 'Well, He didn't get married, so we shouldn't do that..." I mean the across-the-board connotations, here. If He is to be our role model for how we're living our lives on a daily basis, then surely it would behoove us to analyze what He did and did not do.

John 3:16 is so well-known I don't even have to recite it. But the very next verse should go hand-in-hand with it. John 3:17 says, "For God did not send His Son into the world to condemn the world, but to save the world through Him." That's a pretty powerful statement in and of itself, right? If anyone had the authority to condemn someone else, it was the sinless Jesus, the Son of God. And yet, that was not His mission in life, so it should certainly not be ours. His mission was to save the world. Our mission should reflect that, as well. We are not the ultimate sacrifice, we are simply sinning sojourners who are all saved by His sacrifice. How does that translate into our mission here on Earth?

We live our lives differently. I don't mean we should abstain from 8 million different things and then make people feel badly if they don't abstain. That's not part of the plan. We're just supposed to love one another, regardless of flaws and failures, and do what we can to point others in the right direction.

Let's say you're 23, you get an invitation to a kegger party, and you don't drink. Now's the time to ask yourself the question: What WOULDN'T Jesus do? Well, He wouldn't make everyone else that's going to the party feel like terrible people for going. He wouldn't talk badly about them. He wouldn't act all Holier-Than-Thou and decline the invitation in a haughty manner. Chances are, He would go to the party. (I can hear you gasping at my audacity, but how about we study what the scripture has to say about Jesus and His party-going, hmm?)

Mark 2:15-17 shows His mission in a nutshell. Basically, Jesus and His disciples sat down to eat with a bunch of 'sinners' (so deemed by the ever-phun pharisees, leaders of the law) and those pharisees pretty much flipped out that He would do such a thing. Jesus said right back to the pharisees, "People that are healthy don't need a doctor. The sick do. I'm not here to hang out with the righteous, I'm here to call sinners to righteousness."

So it begs the question, if all we do is go to our happy, safe little church, with our happy safe little church people, and we spend an hour or two singing and eating and listening... then we go back to 'real life' and keep ourselves what others might deem 'above reproach', who's being helped? What lives are being changed? How is our mission being furthered? How is the Word of God being taught to anyone that might need to hear it? The assumption is, if we're already going to church on a regular basis, we know what we need to know.

Now is the time to BE the church. BE the hands and feet of Jesus. Time to take a look at 1 Corinthians 12 again, for those of you who have heard it a million times, or perhaps for the first time. Let's focus on verses 12-27:

At first glance, it's as though He's taking to 'We Christians', right? But did you notice a few things... Jew, Gentile, Slave, Free... some parts seem to be weaker, less honorable, unpresentable... YOU are the body of Christ? He's talking about ALL of us. Every human on the face of the planet. We can't pick and choose who gets in and who doesn't. It's not a mean girl clique, this whole 'Christianity' thing. You don't have to be presentable, or fixed-up, or shiny, or perfect, or sinless for Jesus to love you. Because, newsflash: NOBODY is. We're all a bunch of sinners, with no degree of separation between someone who fantasizes about embezzling money from work and someone who actually murdered their boss. So our mission in life, as the body of Christ, is not to decide who we want to love and who we don't, nor is it to judge who is best fit to join in and who's not. Treat those who are NOT yet believers with honor! Go out of your way for THEM. Let THEM know they are loved!

Serve one another. If you truly want to ask the question "What would Jesus Do?", also ask yourself what He wouldn't do. He wouldn't make anyone feel less-than. He wouldn't tell you that you have to be better for God to love you. He wouldn't hide His head inside a church (or a synagogue) and never meet anybody new. He wouldn't judge or condemn people for their sins. He would simply love God and others, live humbly, be Himself, and be something so different among the world that, over two thousand years later, people still can't stop talking about Him.