Every Step You Take 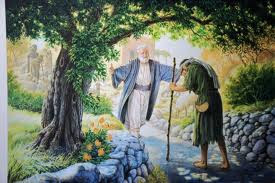 Now that the hauntingly awesome 80s song 'Every Breath You Take' by The Police is running through your head, let me write out this quote from Joyce Meyer that prompted my title today:

"God will tell us the way to go (see Psalm 37:23), but we have to do the walking. A walk with God develops by taking one step of obedience at a time. Some people want the entire blueprint for their lives before they will make one decision. God does not usually operate that way; He leads us one step at a time. By faith, we take the step God has shown us, and then He gives us the next one. At times, we may fall down and must get back up; we may stumble, but He always helps us. We continue on by His strength and His grace, knowing that every time we face a fork in the road (a place of decision), God will guide us."

Verse 24 of that same Psalm reads, "Though he falls, he shall not be utterly cast down, for the Lord grasps his hand in support and upholds him." Wherever we are in life, whatever our past, whatever our present situation, and whatever our future -- God has it under control.

As human beings, we have this constant desire to be in control. When we aren't, we feel like things are chaotic. Very few people actually enjoy chaos, even when they profess to do so. It's when things become SO FAR out of our control that we become overwhelmed, anxiety-ridden, panicked, depressed, or a myriad of other emotions that we feel we cannot handle. We often feel as though, "If I could just sit back and relax, everything would fall into place." In those moments, we're so close to the truth, and we don't even know it...

The bible tells us, in no uncertain terms, that when we put God first in our lives, everything else will, indeed, fall into place. Time and again, we've heard the verse telling us to seek first the Kingdom of God, and all the rest will be added to us. It's not just a catch phrase, you know. It's a monumental truth that we have a difficult time grasping because of our need for control. What if we COULD just sit back and relax? What if we had someone who would bear the burden of the responsibility and we could trust them completely to handle each and every situation, good or bad, that came our way? Well, we do. It's on us, however, to trust and follow.

My mother used to tell me that my conscience would guide me, step-by-step, and that if I listened and followed what I knew I was supposed to do, that little voice would get stronger and I'd more easily know the right response in every situation. She also warned me that if I ignored that voice, it would grow weaker day after day, and there would come a time when I might not be able to hear it at all. The woman is usually right, and this was no exception. There was a point in my life when I absolutely knew the right thing to do, and I did the opposite. Time and again, I'd defy what I knew to be the promptings of my conscience (read: God!) just because I wanted to be in control.

What I found out after many years of doing that is that God is so good, He will let us make that choice. He will not force us to listen. He will allow us to be in control of our own lives. I also found that when I'm in control of my life, I do nothing but make a big, fat, ugly mess of it because I don't have a beautiful vision for the future. Humans are junkies for instant gratification. We want what we want, and we want it right now. We don't think through what the repercussions might be or, if we do, we don't care and we do things we shouldn't anyhow. The result is said big, fat, ugly mess. Emotionally, sometimes physically, and always spiritually.

There's a beautiful parable that Jesus told about the Prodigal Son (Luke 15:11-32). Basically, a man has two sons, and one of them is a selfish jerk who demands his inheritance, leaves his family, squanders everything he has, makes a plethora of terrible decisions, ends up broke and hungry and hurting and finally realizes that the only safe place is back home in his father's arms, but he's afraid of what dad might say. What he finds is that his father is so good, so loving, that he doesn't even get a lecture when he comes home. He gets a celebration, the likes of which hadn't been equaled. His father loves him unconditionally, regardless of his failures, his rebellion, his selfishness. And he is not just accepted at home, he is embraced full-throttle by his father who comes running at him when he sees his son far away.

The moral? God loves us so much that it doesn't matter what a mess we've made of our lives. When we're ready to throw in the towel and admit we can't do it all on our own, when we're ready to stop trying to control everything, He's there. He's there waiting, running towards us with His all-encompassing, unconditional love, even when we don't see Him over the hill.

Take a breath. Take a step in the right direction. You'll be surprised at how quickly you'll be embraced.