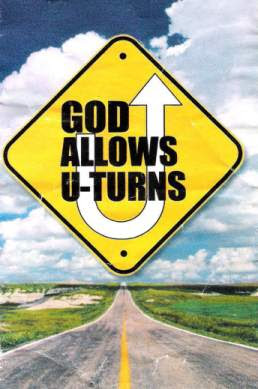 But our God is a God of second chances.

The bible tells us that He is eternal, that he is all-powerful, all-knowing, all-seeing. It also says that He doesn't change. Those of you who are reading the bible for the first time might see a God of punishment and sacrifice and fear and think, "If this is God, and He doesn't change, I'm scared to death and I don't want anything to do with this!" Here's the thing, though -- in all of His awesomeness, He KNEW we would need second chances, and He wrote that right into the story of creation.

So often, people pick out pieces of the Bible they want to use out of context to validate their own beliefs. That's not how the Word works. The context must be taken into consideration for every single verse, story, law, commandment, miracle, death, and life in the Bible. Each piece is speaking to a specific group of people at a specific time, and while it is all useful for learning purposes, we're not to subscribe to every letter of the law that was once given to a different group of people over two thousand years ago. The overall concept of the Bible is this:

A God who loves His people, ALL of His people, so much that He paid the ultimate sacrifice Himself so that they could have a second chance.

And a millionth chance.

The Ten Commandments are great. Do we have to follow them all to get into Heaven? No. Why? Because Jesus came to take on the punishment for our sins and give us the grace and mercy we need to have another chance. And when I say that he wrote it into the story of creation, I mean this: it wasn't a plan B. It wasn't a "Well, let's see if all of humanity can follow every single one of these sacrificial laws, purification laws, food laws, sexual laws, marriage laws, hygiene laws, and this set of commandments. If they can't, I'll have to think of something else." No, He's GOD. He already knew we couldn't. So, in Loving God fashion, He humbled Himself to take on the form of one of us. HE did it for us. He was perfect so we don't have to be. And when we're not, He doesn't want us to hide. He wants us to come to Him. He wants us to learn. He wants us to try. He wants us to love, and to love, and to do nothing but love.

In essence, if we're not loving, we're doing it wrong. That sentiment is echoed in I Corinthians 13, that famous love passage that's quoted at weddings, on inscriptions, posted on Facebook pages -- the beginning of the passage is not as often read and, when read, not often understood.

Basically, nothing you say, nothing you are, nothing you do matters if it doesn't come from a place of love.  The Pharisees were awesome at nitpicking the law into tiny little shreds, doing things right down to the letter, making a big show of all the money they donated -- and they're the ones Jesus railed against the most, because nothing they did came out of a place of love. It didn't matter how much money they gave or how perfectly they followed the rules. They were self-centered, judgmental hypocrites and Jesus gave them nothing but grief the entire time He walked the planet. News flash: He feels the same way about modern-day hypocrites, because He doesn't change.

So, here we are, the day after Easter, with a choice to make. Am I going to sit here, still full of ham and potatoes and gravy, and keep living my life the same way I did before I knew that I had a second chance? Or am I going to give myself wholeheartedly over to the knowledge that there is a Good God, so Good that He would go to death and back for me, to rescue me when I fall down? It's a choice we have on a daily basis.

We fail. We fail miserably. We fail every day. We fail in every way possible. And He reaches down, picks us up, brushes us off, wraps us in a hug, and sends us on our way.

Two things we're supposed to do: love God and love each other.

That's why I thank God every day for second chances.