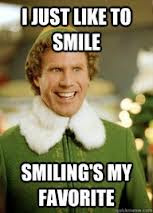 Actual scientific research has been done on smiling, in case you've been hiding under a rock and don't know. When you're down and you smile anyway, your mood actually improves.  According to a study done in Sweden, reported on Positive Psychology News, "...when people activate muscle groups that link to specific emotions, their body will react as though they are really experiencing that emotion. If you wrinkle your nose and narrow your eyes, your body will release some adrenaline and your heart rate may speed up as though you are angry. If you mimic a smile by lifting the creases of your lips and squinting your eyes, your body will release serotonin, dopamine and other “feel-good” indicators." The real world take-away? Smile. It will make you happier.  Make smiling your favorite. 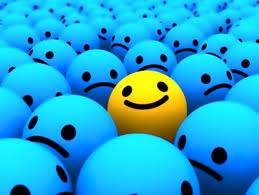 Granted, this little yellow happy face might be you in a sea of sadness, but... wouldn't you rather be a positive influence over the rest of the crowd than be a part of them? You know from personal experience that, when you're seeing that genuinely happy person in front of you, it makes you want to smile, too.  It lightens your load a little.  It makes you feel like things aren't so bad.

Eventually, if you attempt to be the positive influence, the picture might look a little something like this: (No, that's not you... that's that one person who is always unhappy, no matter what you try to do.)

Psalm 118:24 says, "This is the day that the Lord has made. Let us rejoice and be glad in it." It doesn't matter what the day holds -- God's got this.  If it's a trying day, He's got your back. If it's a day full of heartbreak, He's got the shoulders to carry it for you. If it's a day full of joy, it's that much easier to smile. What a relief to know that we don't have to go it alone. What a relief to know that we can do something as simple as smiling and it can help to brighten our own mood, and the moods of everyone else around us.