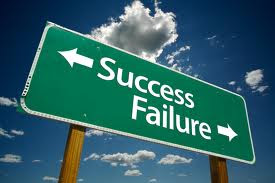 Wouldn't it be awesome if, wherever you were, you could see this sign and know, in no uncertain terms, the right path to take?  Would you take it?  I mean, if you looked to the left where it said 'Success' and you could see nothing at the end of the long, winding path... but you looked to the right where it said 'Failure' and there was a total hottie standing there with chocolate silk pie and a bag of money to hand you, it might still be a difficult choice, right? You'd have to trust more in the sign than what you saw with your own two eyes.  You'd have to have more faith in the sign than you had in your physicality which is screaming, "GO WITH THE RICH HOTTIE WITH THE CHOCOLATE!"

So, maybe the sign is there, has been there the whole time, and we're just not paying attention because we're letting our circumstances dictate our path instead of following the way we know is right in the end.

Take a step.  Take one step. Turn away from the hottie, the pie, the money, and take one single step in the right direction.  The sign is right there. You can clearly see where you're supposed to be going.  Because, who knows what lies at the end of that long and winding path? There could be bevy of hotties with an infinite supply of every kind of pie you could ever dream of lying atop treasure piles the likes of which dragons wouldn't even be large enough to guard.

(I'd like to take this opportunity to say that I had an awesome piece of pie today next to my hottie husband and we're getting our tax returns in a few weeks, so that might have dictated a bit of my imagery today. Just sayin'.)

"A journey of a thousand miles begins with a single step," said Lao-Tzu.  If we want to put our life back on track, to turn from the ways that have done us nothing but harm and led us nowhere but failure, we have to start by taking a single step in the right direction.

My other suggestion is to get a walking partner.  Nobody wants to walk a thousand miles alone.  We need to be lifted up when we fall, and we need to be there to lift someone else up, too.  Sometimes we need to be carried.  I'll admit it -- sometimes I need to be dragged.  As long as it's in the right direction, choose a friend, a partner, a spouse, a companion for the journey.  It's not only easier, it's more fun to do life together than it is to do it alone.

The great thing about taking a step is that it usually make it that much easier to take the next one.