I'm one of those people who doesn't believe much the first time I'm told.  I like to search for myself to find the answers to things.  I've been burned too many times to just flat out believe someone when they tell me something, you know?  You have, too, I'm sure.

Which brings me to the concept of Christianity.  If you are to believe the most vocal of those who call themselves Christians, then we're all a bunch of hateful, holier-than-thou, judgmental jerkfaces who pride themselves on sinlessness and making others feel bad about themselves.

What's wrong with this picture? 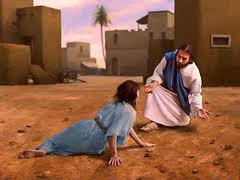 Well, I'll tell you what's wrong. It's filled with people who have absolutely no idea who Jesus is, what He did on this Earth, what His words meant, and how His actions and reactions should be perceived.  In fact, it's pretty obvious through the actions and reactions of those particular people that they likely haven't even read the bible for themselves, and they are perpetuating something that was passed down to them by other people who hadn't read the bible for themselves.  Ignorance begetting ignorance.  You know, like racism and homophobia and all other types of bigotry. Just a hypocrite breeding another hypocrite and creating a lineage of misinformation.

Somebody's got to set the record straight.

Look, everybody and their brother knows John 3:16, right? It's all over the place.  "For God so loved the world that He gave His one and only Son, that whoever believes in Him should not perish but have everlasting life."  That's wonderful news.  But there are a few misconceptions about it.

First, it's perpetuated by many that the real meaning of the verse is "For God so loved us Special Ones that He gave His one and only Son that whoever believes in Him (and does good things and goes to church and helps homeless people and points out the flaws of others so they can fix themselves so God can love them, but not if they're black or gay or liberal) should not perish but have everlasting life."

Or is it? Because what does John 3:17 say? Oh, you're not aware? No worries... I'll tell you.  It says, "For God did not send His son into the world to condemn the world, but to save the world through Him." Wait, what? No condemnation? That's absurd, right? I've never heard that before!

Haven't we? What about the way Jesus treated the woman who was caught in adultery?  John 8 has the story.

1But Jesus went to the Mount of Olives.2Early in the morning He came again into the temple, and all the people were coming to Him; and He sat down and began to teach them.3The scribes and the Pharisees brought a woman caught in adultery, and having set her in the center of the court,4they said to Him, “Teacher, this woman has been caught in adultery, in the very act.5“Now in the Law Moses commanded us to stone such women; what then do You say?”6They were saying this, testing Him, so that they might have grounds for accusing Him. But Jesus stooped down and with His finger wrote on the ground.7But when they persisted in asking Him, He straightened up, and said to them, “He who is without sin among you, let him be the first to throw a stone at her.”8Again He stooped down and wrote on the ground.9When they heard it, they began to go out one by one, beginning with the older ones, and He was left alone, and the woman, where she was, in the center of the court.10Straightening up, Jesus said to her, “Woman, where are they? Did no one condemn you?”11She said, “No one, Lord.” And Jesus said, “I do not condemn you, either. Go. From now on sin no more.”

Notice the things He doesn't say:  "You're a sinner.  You're not good enough.  You deserve punishment. All these guys are right.  All these guys are sinless, so why can't you be? Grab some stones, boys! The law says we should kill her.  You're worthless.  You'll never be any better than you are right now.  You have to change for me to love you. You're a whore.  I condemn you.  If you sin again, I'll condemn you again." 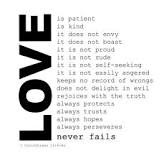 *There is only one problem with this equation, and that is the because of the substitution.  We aren't Jesus, we're following Jesus.  We aren't perfect, we're striving toward perfection but always falling short.  We DO fail, and that's built right into the bible as well.  Jesus was one thing we're not: sinless.  No matter how hard we try, we're not going to achieve the perfection, and that's okay.  It's not a race, or a competition, or a game that we can win at, or beat other people at.  It's a Journey that we're all in together.

Why does Jesus say to the crowd of accusers to let the one with no sin cast the first stone? Because they were all sinners.  Romans 3:23 says, "All have sinned and fall short of the Glory of God".  John 1:18 says, "If we claim to be without sin, we deceive ourselves and the truth is not in us." No, we're not perfect. Yes, we do fail.  But it's across the board -- EVERYONE fails.  It doesn't matter what color your skin is, who you sleep with, what your political affiliation is, what you do for a living, how big your house is, what church you go to or don't go to -- we're all in the same boat.

Once people stop judging and hating and teaching others to do so, maybe someone out there might hear what Jesus really wanted us to hear:

That we're loved so much, we're worth dying for.