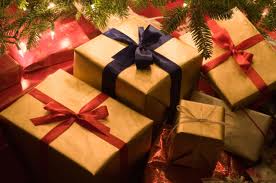 It's inevitable.  Each year I swear to myself that I will have all of my shopping done, presents wrapped, and cards written and mailed by December 1st.  This plan goes awry sometime in November when I realize that, once again, Thanksgiving comes before Christmas and it's right around the corner and I don't have time to shop and I should've been finding bargains all year long and... and...

...and it's December 23rd and I'm doing my second day of shopping.

It's usually not as bad as that, but this year it certainly was. With cars dying and jobs changing and life happening so fast, the whole notion of Christmas just got away from us.  Even our daughter said to me this evening on our way to pick up some last minute items at CVS, "It doesn't even feel like Christmas."

That struck a chord.  Because that's what it is, right? It's a feeling.

"Christmas isn't a season; it's a feeling." -Edna Ferber

Where is the place for that feeling in our technologically-overloaded, me-centered universe? What has our gift-giving become? We've made it obligatory rather than something we do out of the kindness and joy in our hearts.  We've made it about saving money or going on a spending spree, about racking up credit card debt, about staying up all night to get the best sales possible...

The greatest gift that could ever have been given appeared not in sparkling holographic wrapping paper, not in a mansion emblazoned with a massive display of LED lights set to music, and not in a limousine decorated with antlers and a red nose on the grill.

The Gift appeared in a manure-filled barn behind an inn, surrounded by animals and in the middle of nowhere.  It ended up that night wrapped in cloth and stuck into a feeding trough because there was no suitable place.  It began as a scandal.  It ended with betrayal and murder, and then a miracle that saved the entire population of humankind forever.

This is what we celebrate, as we scavenge bargain bins for stocking stuffers, holler at people in parking lots for taking too long, mutter to ourselves consistently that we can't wait for the holidays to be over.  I'm as guilty of it as anyone else, and usually more so, since I tend to postpone as long as humanly possible before shopping.

I'm remembering what that feeling of JOY is like -- being surrounded by family, hearing Christmas carols in the background, watching the snow fall.  I'm remembering that the reason for that joy isn't just around at Christmas, it's available in our hearts at any given moment, whether it's December 25th or mid-July.  It's a feeling.

I don't care if it IS Christmas.  I want it to FEEL like Christmas.

"I will honor Christmas in my heart, and try to keep it all the year." -Charles Dickens