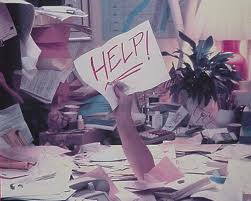 This is a picture of me during my first few weeks at the new job.  Okay, well, perhaps that's a bit of an exaggeration.  It felt like this at times. I'm trying to keep my head above water because it feels like there is constantly something new happening and I'm struggling to keep up with it.  I haven't been fired (yet), so that's a plus.   I enjoy what I'm doing, however, and think I'll pull through just fine eventually.  Thus far, it's just a matter of getting 90% of things done, then going, "OH... yeah... I forgot about that!"  Then, while I'm working on the 10%, another round of 100% comes sneaking through the door.

My husband and I signed up for Financial Peace University at our church, the Dave Ramsey seminar with a workbook, hardcover book, and other materials.  We've been listening to him for a long time, and I've read his book "The Total Money Makeover" so I was hesitant to sign us up at a cost of $95.  I will say, however, that even going to the first session this past week, I've seen that it will be productive for us.  We have a leg up over a lot of people who are attending, or who have attended, because we've been working for years to get ourselves out of debt and to start saving.  We even thought we might be able to lead FPU next year, perhaps. After eight years of marriage, we've paid off all of the straggler-loans and debts from his previous relationships and endeavors, gotten a much better credit score for him, paid off my car loan and credit card, and we're in a good position right now.  With both of us working, we should be able to save and get a traditional loan on our home sooner rather than later, then pay it off early.  We have a lot of expenses right now, but nothing we can't handle.  The car is going to die any moment but, right now, I'm working on the prayer-ignition-system: I sit in the driver's seat, beg God to let the car get me back and forth to where I need to be that day, then thank Him when I get back home.  I'll assume that the day this system does not work is the day that God wants me to get another pre-owned vehicle which will cost less than what we have saved up, because we will. not. take. out. another. loan.

I'd like to interrupt this blog to say "Go Blue".

It seems as though the new job will keep me quite busy, so I might not be posting quite as often as I was in the weeks leading up to being hired there.  However, I'll attempt to post once a week during our day of rest -- not just to update you, but to keep up the inspiration on Facebook as much as possible.  As much as I dislike Facebook, I can definitely see the positive uses and, if at all possible, would like to use it to empower and inspire others.  I realize I won't always be in the mood to do this but, at the very least, I can refrain from posting negatives, right?

Things are looking up.  God has plans.  Jeremiah 29:11 is becoming my mantra for myself and for my husband, especially when he's not (or I'm not) really feeling it.  "For I know the plans I have for you, says the Lord, plans to prosper and not to harm you.  Plans to give you a hope and a future."

Sometimes it's not about sight, it's only about trust.