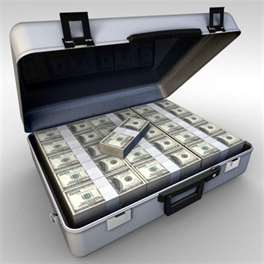 What if you were in a serious jam financially?  I mean, you've made a train wreck of your finances so that you're a couple hundred thousand dollars in debt with your credit cards, and your home is about to go into foreclosure, you've got two car payments of $400 each month, and you quit your job three months ago and can't find work?  There isn't a shred of hope in sight for you and you know, beyond a shadow of a doubt, that you cannot fix this mess yourself.  You put yourself in this position by your own choices, and there is only one thing that can possibly save you: a miracle.

As you're sitting in a sobbing heap on the floor of your (soon-to-be-The-Bank's) living room, there is a knock at the door.  You peek out to see a man in a suit who's obviously selling something.  Rolling your eyes, nearly walking away from the door, you decide to open it and just send him along his way.  There's something about his eyes that says he's seen rejection before, but he's going to be persistent because he has something for you that nobody else can offer you.  When you open the door, he tells you exactly that.

"I can't give you anything," you say in disgrace.  "I have nothing."

"That's okay," he tells you.  "You don't have to give me anything.  You just have to let me in and hear what I have to say."

With nothing to lose, and nowhere to go, you let him in.  He doesn't sit until you invite him to do so and you can't even offer him a cup of coffee because there's no coffee left in the house.  He starts to talk, and he doesn't stop.

"I have something unique for you that nobody else can offer you," he begins.  With a knowing smile, it's almost as though he can read your thoughts when you want to interrupt him to tell him this is pointless, so he holds up a hand to stop you when you haven't yet parted your lips, and he continues.  "I'm going to get you out of this bind.  By my calculations, it would take exactly $572,038.23 to get you out of debt right now.  It would pay off your credit cards, your vehicles, your mortgage, your student loans, the money you borrowed from your parents, the money you borrowed from your best friend that you haven't spoken to in two years because of your guilt at not being able to pay him back, the personal loan you took out at a credit union, and the paychecks you never got around to giving those payroll advance places."

In absolute horror and awe, you stare at his face, unable to speak.  It's incredible: he knows you, inside and out.  He knows your every thought, your every debt, every mistake you made.  He has your number, that's for sure... literally.  Part of you wants to crawl under the couch in shame, and the rest of you wants to shout in anger at his audacity until you hear his next words.

"I have exactly $572,038.23 in this briefcase and I want to give it to you.  It's not a loan.  It's a gift.  You will never owe me anything for this.  We can be friends after that, or you can never speak to me again, it's your choice.  But I want to give you this briefcase, and the only thing you have to do is take it from my hands."

I'm going to stop the story right here, right now and ask you a question.

Would you take the briefcase?

It's not a no-brainer, you know.  There are a lot of emotions pent up here.  It's easy to say, 'Sure, I'd take it!'  But how would you feel about taking it if you were really faced with this situation?  Would you be able to accept such an incredibly large gift from a stranger when you know there's no way you deserve it?  No way you could ever pay it back?  No way you could ensure that you wouldn't completely screw up again in five years?  Would you be able to trust what he was telling you?  To open the briefcase and really believe that all of your money, down to the cent, was in there to be repaid?  Could you allow yourself to stop in your tracks, the tracks that had led you to this mess, accept this gift, and turn around to start over?

We have to be able to admit to ourselves that we fail.  That we cannot do it alone.  That we aren't equipped to deal with pressures, with temptations, with daily life all on our own.  We have to see the ways we make mistakes and learn from them.  We have to confess that we're lost most of the time, just trying to find our way in the dark.  And when someone comes along with a light, and we see that we're going the wrong direction, we have to follow the light, not keep stumbling along in the dark because of our own pride.

Then someone comes to you and says, "Hey.  There's a really simple solution to all of this.  This guy, He gave His life for you, so that you could start over.  He's not asking for your money, or your deeds, or your piety.  He's not asking for your perfection, or your constant preaching about His awesomeness.  He just wants to help you.  He wants to love you like you've never been loved, and like you never will. He wants to take all of this mess that you made away, and replace it with goodness.  With kindness, and love, and compassion, and joy.  Joy like you wouldn't believe.  All you have to do is accept it.  Just believe that it's there and say, "Yes!  I'll take it!" 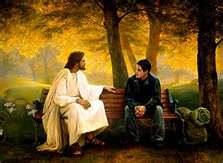 Because that's the real question here.  It's not about money.  It's about love.

Can you allow yourself to be, for the first time, loved in such a way that nothing else matters?  Because I guarantee you, it will change your life forever.

Let Him change your life.