Finally in the Air 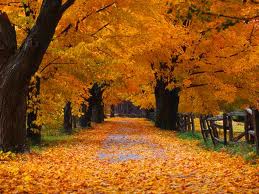 There are few things more tranquil and fulfilling to me than a crisp autumn morning, when the leaves aren't quite beginning to change, but you can feel them thinking about it.  You have that sense of urgency inside, like something incredible is about to happen, and it's coupled with a sense of nostalgia at the same time.  I love the air, the breeze, the sun shining but not boiling my skin, the birds twittering about, debating whether to start thinking about migration or to pull that worm up out of the soil.  I am filled with expectation and excitement for the upcoming season -- school starting, pumpkins ripening, neighbors raking, pies baking.

This season, I have been blessed with so much already.  I'm transitioning from the job I've had for over six years into something I've always wanted.  I'm working with my husband two days a week and working with a different team the other three.  I'm saying goodbye to old habits and friends and embracing new routines and faces.  It sounds so cliche to say 'God is good all the time', but I've found nothing to be truer in life than these words.

For so long, I've been immersed in a depression that I couldn't quite put my finger on, always hoping and praying for something more, something new, something different.  I've known that He's had a plan, I've said it time and again, but just spouting platitudes has never done anything for me, or for anyone else.  I have been in torpor.  I have been numb.  I have been angry at God and I have doubted -- OH, how I have doubted.  But just as He loved Thomas the Doubting One, He loves Stephanie the Doubting One just the same.  His plans are greater than plans I could have dreamed or schemed.  His will for me encompasses ever-so-much more than I could have imagined or fantasized.  I know that this is just the beginning, and that He will be with me as I scale this new mountain.  He will be with me when I make it to the top, and He will be with me when I scale the next.

He will be scaling them for me.

Life is not without its deep canyons, for certain.  I still have no idea whether or not I can or will get pregnant.  I don't know if a horrendous car crash will take my life tomorrow or the life of someone I love.  I haven't a clue as to whether I'll succeed or fail in the rat race that we call Earthly Life, but I have more than an inkling of how to get through it.

"Trust in the LORD with all your heart, and lean not unto your own understanding.  In all your ways, submit to Him, and He will make your paths straight." -- Proverbs 3:5-6

It's time I started living for His plan instead of my own.  It's never failed to be the best plan, and it never will.