Have a Drink on Me 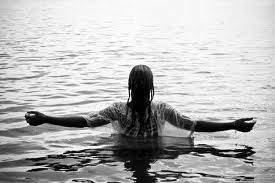 After spending the last couple of posts talking about what it feels like to be spiritually dehydrated, I want to let you know about a moment of pure, unadulterated, water-covered bliss.

I know that anyone who's been steeped in churchy churchiness their whole life is going to think I'm talking about baptism, but let me stop you right there.  Yes, baptism is an incredible experience, but it's not the first moment that you feel the soothing, all-encompassing relief.  To get there, I have to tell you a little story.

I guess that's not the only way to start this story, but it's probably the best way.  I spent a great deal of my life avoiding God, Jesus, all things religious or spiritual, and it didn't really have anything to do WITH God, Jesus, or all things religious or spiritual.  It had to do with people.  People who called themselves Christians.  People who represented Christ.  People who were telling me who I had to be and how I had to live my life and, worse, judging every word that came out of my mouth, every hairstyle and article of jewelry I walked out of the house with, every place I went, everything I did, and everyone I hung around with.  It was a slow fade from being and believing to becoming jaded and angry and losing my faith completely.  I could feel my heart hardening, and I didn't care.  I wanted a wall, a great big steel and concrete layered wall, between myself and these people who were claiming to be Jesus' Chosen Remnant People (which, in and of itself, seemed such an arrogant phrase it would close most people off).

So I built that wall.  I built it out of Great Debates, arguments that a good and kind God would not love one person more than another, would not hate any of His creations.  I built it out of sarcasm and a self-centered need to be right.  I built it out of an attitude that said, "If you're God's favorite, I'd rather go to Hell than spend eternity with you."  I removed all of what I had been taught from my brain and started over.  I screamed back at the college campus preachers when they told me I was going to Hell.

None of that is the "I'm an idiot" part.

That part came from a lack of love.  I began to fill my heart so much with hatred of these people that it clouded everything God was trying to do through me to begin with.  I believe that any ministry He might have been working in me began twenty years ago when I argued with my own mother about whether or not to wear earrings to church.  We didn't think there was anything wrong with jewelry, but our church did.  So we'd take off our jewelry when we went to church and put it back on when we came home.  Thereby, my disgust for hypocrisy began.  I didn't think it was bad, I didn't think that GOD thought it was bad, so who was I trying to please by taking it off?  Other people.  Other people who would judge me for wearing it.  It wasn't their place, true.  But they would do it nonetheless.  My hatred began as just a tiny spark of injustice, of 'that's not fair'ness, of 'it's MY relationship with God, not yours'ness.  I let it grow over the course of more than ten years, to consume the inside of my heart with nothing but a disgust and superior attitude toward and an intense hatred of...

everyone who did not believe the same way I did.

Are you following me, here?  I'm an idiot because, by building this steel-and-concrete wall between myself and them, I was no better.  I was arguing that they were no better and had no course to judge others, and yet in my own heart, I was judging them.  I thought I was better and more enlightened and superior to them.  I had become the very thing I hated the most.  I had become a hypocrite.

I've had a great many negative experiences in my life.  I have chain-smoked, I've been drunk, I've tried drugs, I've been a betrayer, I've been betrayed, I've been in a miserable marriage, I've been divorced, I've been made fun of, talked down to, fired, I've lied, I've cheated, I've stolen, and if I spent the next half hour typing 120 words per minute, I still wouldn't be done naming all of them.   But none of it matters.  It doesn't matter because there was a moment, a single moment, where I took everything that I had become, every web I had woven, every lie I had told, every hole I had dug, and I dropped them all.  I laid them all down, stopped where I was, stopped running towards the edge of a cliff and spoke to God for what was probably the first time in years.  I was sobbing, I was nearly passing out, and I cried out loud,

"Please help me! I can't do this myself."

I kid you not, He answered.

I didn't hear a voice, there were no angelic bells and whistles and shiny lights, no burning bush or moving mountain or doves descending.  I just felt it.  You know this 100+ degree weather, and what it feels like to be out in it with no A/C, no water, no respite?  It was as though I'd been wandering in a desert, but an oppressively humid desert, my skin burning, my feet aching, flesh being pecked from my face by preemptive vultures when suddenly, I stopped, turned around, and right behind me was this air conditioned oasis.  I just opened the door and walked in, and was immediately led to a pool of cool, refreshing water, and a glass of ice water brought to my lips, a frozen washcloth applied to my forehead all at once.  In all that imagery, all that wonderful relief, I might not have heard Him say the words, but I most certainly FELT Him say, very clearly,

My life didn't change overnight.  All of the wrongs were not suddenly made right, I didn't instantaneously become perfect, sinless, and upright.  I didn't stop making mistakes, I didn't start going to church regularly,
all the people I had hurt or alienated didn't instantly forgive me.  For all intents and purposes, nothing on the exterior changed.  But the interior?  I was filled.  Filled with a hunger to change, to help, to love, to forgive, to be better, to care.  I was so thankful, so grateful.  I could look at myself in the mirror once again and though the reflection was the same, I knew something deeper and more meaningful was underneath.

I encourage those of you who are 'testing the waters', so to speak, to allow yourself to be open to learning, to listening.  Let the wall come down.  No one is perfect.  People get stuck in their ruts and their own little worlds.  Yes, they may be completely wrong when they express their beliefs.  They may be offensive, and they may not at all be representing Jesus when they call themselves Christians.  But for all the judgment they are throwing out, we're no better than they are if we're judging them, too.  God loves each and every one of us, no more and no less than the next.  My advice?  Don't be an idiot.  Jesus and the Beatles both said it:

Stephanie Jean
Posted by SJS at 11:57 AM