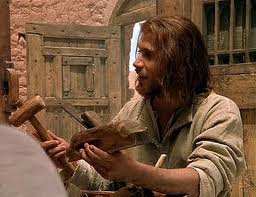 When I was in high school and college, I spent a couple of summers working with my dad at the place of business where he has been for decades.  I was not (and still am not) a morning person, so to be awakened from my beautiful slumber around 5:00am for such a menial thing as "work" did not sit well with my pampered teenaged self.  I would complain.  I would sleep as late as possible.  I would grumble to my dad about why he insisted on getting there early -- if work started at 6:00, why did he get there at 5:45?

"Early is on time, and on time is late," he would tell me.  For my father, you see, had (and still has) this incredible work ethic.  You do what needs to be done, and thoroughly.  You follow the proper steps that need to be followed, and every time.  You show up early to prepare for the day, and you stay late if the job is not yet finished.  You go in for overtime if the job calls for overtime.  You don't complain, you don't make excuses, you don't call in sick unless you absolutely cannot drag yourself out the door, and you do it because that's how it's done.  I might not have understood that when I was 17, 18, or 19 -- but I can certainly understand it now.

The greatest part about working there was, I was working with my dad.  I got to see how much effort he put into his job, and I got to see his satisfaction when the job was well done (which it always was).  There was another thing I noticed.  The founder of the company worked there (and still does) every day, too.  He didn't have to.  He could simply have hired people to do that sort of thing for him, and never get his hands dirty.  But he was out there with everyone else, the same work ethic as my dad, doing what needed to be done, day after day.  I might have thought they were slightly crazy at the time (because, as we know, teenagers know absolutely everything and their opinions are always correct).  But now, looking back AND looking on today, when these men are in their 60s and 70s, it speaks volumes about their character, their determination and ambition, their commitment level, and their integrity.

It also speaks an allegory that I just recently thought of as I was reading my devotionals.  Max Lucado, in all his awesome Max Lucado-ness, points out things in his writing that most people don't see on the surface.  He was talking about how, when we are doing our work for God, we're not alone.  God works right alongside us.  We're not just employees, we are co-workers.  Just like my father, and the company's founder, and myself when I was there.  Sure, they were both my bosses.  Sure, they told me what to do -- but in a gentle manner with as much instruction as I needed.  Both men were full of praise for me when I did something right, and full of forgiveness for me when I did something incorrectly.  At the end of the day, we were all working toward the same goal -- a beautiful, finished product without flaw.  Whatever piece of the job we had, it was the same job, and we were all in it together.

Isn't this just like our other Father?  He might shake His head from time to time at our naivete, our lazy work ethic, our desire to just 'phone it in' instead of pushing through and getting the job done, but in the end, He is always full of praise when we've done what He wanted us to do, and He's always full of forgiveness when we make mistakes.

The best part is, He is working with us while we are working, with the same goal in mind for His kingdom:

A beautiful, finished product without flaw.

Thank you to my father, Mike Stowe, and to Mr. Saratore, for modeling what a true work ethic is.  You both embody Colossians 3:23 -- "Whatever you do, work at it with all your heart, as though you were working for the Lord and not for men."