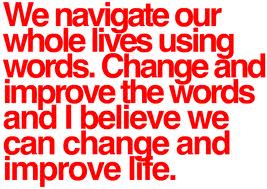 There's this great song by Depeche Mode called "Enjoy the Silence".  It contains such wise lyrics as "Words are very unnecessary, they can only do harm."  Most people pay no attention to the words that come out of their mouths, or out of their fingertips on social networks.  It's not that I'm vehemently opposed to places like Facebook, Twitter, and such -- it's just that I think they're avenues of passive-aggressiveness that become more and more like unharnessed monsters each day.

Back when letter-writing was en vogue, if you were upset with someone, you had to sit down, write everything out longhand, buy a stamp, put it in the mailbox, and wait for it to arrive.  Then, with the telephone, you could have a conversation with someone without having to look them in the eye.  If you didn't like what they were saying, or felt you had to have the last word, you could hang up and not answer if they called back.  Then, email came around.  If there was a disturbance in your relationship, friendship or otherwise, you would type out how you felt about the situation, and click 'send', whereby it would nearly instantaneously appear in their inbox.  Your filter was gone -- on some occasions, you'd learn from your mistakes, realizing that typing and sending without really thinking it through probably wasn't the best of ideas.

With social networks, your emotions are instantaneous.  Any feelings you have in a moment can be broadcast to 750 of your "friends", so that they can all comment on how they feel about the situation, too.  If you're mad at the news for interrupting your favorite TV show, chances are 50 other people are upset, too, and 38 think it's no big deal.  Then you can argue about who's right and who's wrong.  That in itself is annoying, but when it comes down to real life issues -- friendship, marriages, families, employers and employees -- throwing your momentary feelings out there for everyone to see is dangerous and hurtful.  Sure, you're mad.  Sure, you're upset, or hurt, or feel like retaliating.  But let me tell you something -- once it's out there, it's out there.  You can post something for literally thirty seconds and then delete it, but I guarantee you: SOMEONE saw it.

It makes me wonder how kids these days are even learning to deal with their emotions at all.  People will throw someone under the bus in a heartbeat online when they would most certainly not have the guts to say the same words to their face.  They would holler and complain about a person or a situation that they'd never stand up in public and blast.  The social network isn't a safe haven, my friends.  It's a breeding ground for resentment and bitterness, and I, for one, will not be a party to such things.  If you have something to say to me, say it to my face.  You'd better believe that, if I have something to say to you, that's what I'm going to do.

This wasn't spurred on by anything specific.  I just scroll through my news feed from time to time to see things that surprise me.  Don't get me wrong, I've been guilty of hating before.  I've been jaded, and angry, and wanted revenge.  I've been known to say things without thinking.  But the power of the internet can make anything viral.  It's why cyber-bullying is such a problem.  Not only do you get picked on in school, now even being home isn't safe -- you turn on your computer, and you can see what people are saying about you from the former comfort of your own bedroom.  It's why predators have it easier and easier -- people are willing to say anything and give out information just because things online seem so safe, so far away.  People are willing to hurt others drastically simply because they don't have to see the painful look on the face of the person they've hurt.

Whether something is said aloud or written online, the sentiment is still there.  You can help people or you can hurt them.  You can build them up or you can tear them down.  And the adage is the same now as it ever was -- if you can't say something nice, then don't say anything at all.  Imagine the tables being turned, how you would feel if someone immortalized terrible words about you on the internet, and gleaned comment upon comment from others weighing in on a situation they know nothing about.

Actions do, indeed, speak louder than words.  Sometimes the greatest action can be NOT writing something that will bring sadness and hurt upon a fellow human being.  Friend or enemy, our job is not to demean or belittle.  If you hate someone, that's on you -- you should do whatever you can to get rid of that hatred and turn it into apathy, then into sincere desire to help, then to love.  If you physically harm someone, you cannot take it back -- the scars are there for life.  Words are the same way.  Once you put your hatred online, there's no going back from it.  You can say the most awful things, then apologize -- it doesn't take the words away.  The only thing that can take the words away is to never have said them to begin with.

I have a high-pressure job in which I have to mind my tongue more often than not, because I want to speak out against injustice, against haughtiness, against superiority complexes.  Most of the time, I can hold back and just go through the motions, but it takes a great deal of prayer and downtime for me to rejuvenate day by day.  I continue to wonder how different our days would be if each of us had more than a modicum of respect for one another, didn't believe we were any better than anyone else, and went out of our way to make everyone feel comfortable and at ease.  Can such a life even be envisioned on this planet?