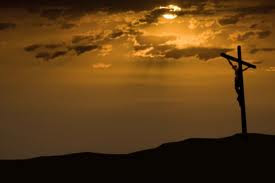 Things are not always what they seem.

Imagine that you put all your hopes and dreams into something, or someone, and just when it looked like everything was going to be perfect, devastation came and pulled the rug out from under you, leaving you alone and empty.

The historic description, or general idea, of a Savior, a Messiah -- it was a conquering King. Someone was going to rise up and change the world. One by one, as people heard His words and saw His deeds, they became closer followers of this man named Jesus. No one had upset the status quo as harshly, opened the eyes of the blind, put themselves on the same level as lepers and harlots and those swindling tax collectors before. No one had told the Pharisees, those law-loving, exacting, judgmental perfectionists what they really thought before. So they gained respect for Him, and He gained popularity. They assumed He was the one that would rise up, conquer, change things for them. He was their Robin Hood. They listened, and they learned, and they told everyone they could about this guy, because there had never been anyone like Him before.

Then, just like that, His wrists and ankles were spiked to some pieces of timber, and He was strung up next to a couple of criminals, starving and bleeding and sweating and deteriorating right before their eyes in the hot sun. He suffered madly, He cried out passionately, and He died alone, like we all die alone in the end.

The rug was pulled out from beneath them.

What now? they must have thought. If He wasn't the ONE, then who was? No one else would be able to speak like Him, heal like Him, have compassion like Him, make them feel like they were important like Him. No one else would have mercy on them like Him, promise them freedom and everlasting life like Him. And could they place their hopes and dreams and joy in anyone else after having been with Him these few years? The only thing left to do was to go home, rest for the Sabbath, and come back on Sunday to pay their respects, then get on with their lives.

"Now after the Sabbath, toward the dawn of the first day of the week, Mary Magdalene and the other Mary went to see the sepulchre. And behold, there was a great earthquake; for an angel of the Lord descended from heaven and came and rolled back the stone and sat upon it. And for fear of him, the guards trembled and became like dead men. But the angel said to the women, 'do not be afraid, for I know that you seek Jesus who was crucified. He is not here; for he has risen, as he said. Come, see the place where he lay." Matthew 28:1-6

All of His esoteric words about destroying the temple and rebuilding it in three days, about going to prepare a place for us so we can join Him, about being the Lamb which was the sacrifice for the sins of all -- He was anything BUT a phony. He was anything BUT a liar. Everything He had alluded to was now coming to fruition, and instead of believing wholeheartedly, they had allowed their preconceived notions of what Messiah was supposed to be like interfere with their actual hands-on knowledge of who Messiah IS.

Don't we do the same thing today? Don't we expect so much from God, so many things to be different, and yet pay no attention to the words He's actually saying to us? He didn't promise that life would be carefree. He promised we could cast all our cares on Him. (1 Peter 5:7). He didn't promise that we could have the power to do whatever we wanted, when we wanted. He promised that we can do all things through Him, with His strength in us. (Philippians 4:13) He didn't promise we wouldn't suffer and die -- even His own Son did that! He promised us that, if we believed in Him and His incredible sacrifice, that we would have the life that really mattered -- the eternal life. (John 3:16)

Today we can celebrate, because He said, "I will not leave you desolate; I will come to you. Yet a little while, and the world will see me no more, bu you will see me; because I live, you will live also... Let not your hearts be troubled, neither let them be afraid. You heard me say to you, I go away and I will come to you." John 14:18, 27-28

Everyone knows and talks about John 3:16, and I'll admit it's possibly the most wonderful, most important verse in the bible -- but no one follows it up with the next verse, which I think is equally as incredible:

"For God sent the Son into the world, not to condemn the world, but that the world might be saved through Him."

He didn't do what He did to one-up us, or to prove how awesome He is, how we are failures because we can't be perfect like Him. He didn't do it to show off, or to wave it in our faces. He did it to save us from ourselves. He did it to give us hope and a fresh start. He did it to make our lives so phenomenally simple that many of us can't even grasp how simple it really is.

Believe. Accept. Take the free gift. It's not like when you get a sales call that offers you a free vacation, and there are sixteen pages of fine print saying that you have to pay to get to the airport and back, and you can't check any luggage unless you pay extra, and you'll be liable for all the taxes and gratuities and you have to sit through four hours of a time share and you can't drink any alcohol on the premises and you have the be 18 years of age and no pets allowed and... and... and.

No, it's actually a free gift.

No, we don't deserve it.

No, we don't have to repay it.

All we have to do is accept it.

Stephanie Jean
Posted by SJS at 6:26 AM