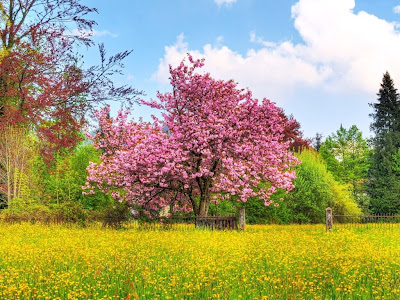 The sun is finally shining, and from the looks of it, it's a beautiful day. I'm stuck inside for the next few hours, but thanks to our clocks popping forward an hour in the wee hours of the morning, it will still be light out when I drive home after work. If I'm lucky, I might even get to walk around in it for a few minutes before it disappears.

This time of year brings many happy feelings. I used to dislike every season except for autumn, but about ten years ago, something changed. I met the man who was to become my husband. Most of you know the story: jaded, recently divorced girl, swore off relationships, blah blah blah. If you don't know the story, it's in the blog archives somewhere so now you have to search for it, mua ha ha. But the feeling I'm describing is that delightful nostalgia of how you felt sometime in the past being brought back on you all of a sudden because of something in the air now.

Our first date almost didn't happen. I was working at an eye doctor's office in Goshen. Normally, I would take a 25-minute lunch in the break room and get right back to work. We were allowed an hour, but had the option of taking less and getting paid more. All the time I'd been there, I had never taken an hour lunch. So, when I decided to accept this nice man's offer to take me to lunch, it didn't occur to me that it might be a problem at work, since that option had always been on the table. The morning of the impending date, my office manager said she needed me to be on the phones at 12:30 because one of the other girls was taking her lunch at that time. A panic in my voice, I said, "I can't!" She looked at me skeptically. I further explained, "I have a date!" The skeptical look became comically skeptical. I was emphatic. "REALLY!" I said. She just shrugged and said it was fine, but I definitely had to be back by one. I walked out to the parking lot to see the man reading an Anne Rice novel, waiting for me. The date went exceptionally well for someone who said she'd never date again. So well, in fact, that it eventually culminated in 'happily-ever-after'. Well, as 'happily-ever-after' as real life gets... we're not oozing money or anything, but we're still in love after a decade together and I can't imagine my life without him.

In other news, my birthday is coming up. I'll be 35 years old. Saying it out loud just feels weird. I don't feel 35. I feel, simultaneously, 17 and 82. My brain is full of ideas, spontaneity, excitement, lists of things to do, fresh zeal, and the like. My body, however, is overweight, exhausted, stressed out, and consistently pushed to the limits of fatigue. I have no energy to do the things I have ideas for. I have no gumption to embody zealousness. I just want to take a few months and renew myself: body, mind, and spirit. Perhaps that will happen when I retire. At age 82. Heh.

My coffee is cold. I realize this isn't a tragedy or anything, but it's a bit of an annoyance seeing as how there's not a microwave here. Maybe if I set the coffee cup out front in the sun, it'll warm up? Probably not the safest way to go about it. Strange how coffee has to be warm and Mountain Dew has to be cold, but they have the same caffeinated effect, and both are gross the other way around.

I have no wisdom for you today. It's just a day of relaxing at work, I suppose, and enjoying the small things like the weather, getting paid to do relatively nothing, and playing with the karaoke machine when no one else is around. Happy, bright, Springy Sunday, everybody!

Stephanie Jean
Posted by SJS at 10:34 AM