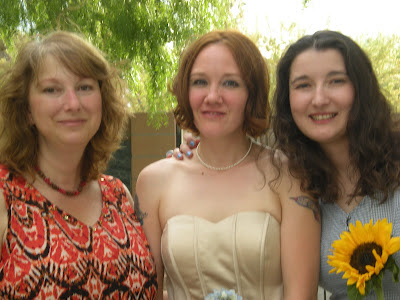 I know a great many of you probably think that turning thirty-five is no big deal. It probably isn't, in the grand scheme of things. Yet, on the other hand, I recall very strongly thinking that thirty-five was terribly old, so there might be some of you in that camp as well.

This picture is of my mom, my best friend since second grade, and myself. Let me tell you a little story.

Once upon a time, there was a fearful, insecure, dark-haired little girl. She liked to sing and act and be a 'ham', but that's because then people would praise her for those things instead of seeing who she really was and criticizing her for that. She wasn't athletic at all, had no agility, and spent most of her young years as gangly, and skinny, and awkward -- all arms and legs and nose, no curves or shape. Though the little girl didn't cling physically to her mother, she definitely clung emotionally and metaphorically to her almost all the time, looking for acceptance. Most of the other kids were scary to her -- they were rough, or mean, or sarcastic -- and the little girl was very sensitive and easily hurt.

When she met the little blonde girl, it was as though they had known each other forever. They spent time in the pool (where the little dark-haired girl couldn't swim without plugging her nose). They spent time on the lawnmower, blades up, driving around with their arms around one another, laughing like crazy. They watched movies, staying up all night and putting each others hands in a bowl of ice water to stay awake just a few minutes longer when they started to fall asleep. They played computer games. They shared everything. They made up dances to songs they liked, lip-synced, choreographed ways to sit in chairs. They went to the beach, to the movie theatre, read books, wrote stories, drew pictures, researched the Loch Ness Monster, planned to "drive" to Scotland someday when they were all grown up, had "BE FRI" and "ST ENDS" necklaces that hooked together to say "BEST FRIENDS", rode scooters in the basement, clung to the electric garage doors so they could hang upside down like bats, and, most importantly...

They always had each other's backs.

In thirty-five years, I've had many acquaintances, a few friends, and a couple of enemies. I've been married and divorced and married again. I've been a secretary, a baker, and a storybook maker. I've had a few highs and a great many lows. I've made mistakes I cannot erase, and done a few things that I'm quite proud of. I've had my heart shattered into pieces, and I've broken a couple myself. I've gradually evolved into the person I am today, who is not the same person I'll be tomorrow, or next year, or when I'm 70.

But she's always been there, and she's never let me down.

It's a rare occasion when someone comes into your life, puts roots inside your heart, and grows there.

I wish I could be in Las Vegas with you for my birthday -- but I love you, Christy, and I'm grateful for the friendship we've always shared.

Stephanie Jean
Posted by SJS at 9:12 AM