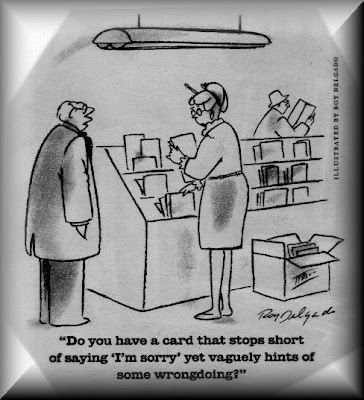 "Forgiveness is the fragrance that the violet sheds on the heel that has crushed it." -- Mark Twain

I wish I'd had my computer at church today so I could have just typed, verbatim, what Jason Miller had to say about Forgiveness. I highly suggest that, if you are in the Michiana area, you get yourself to Granger Community Church sometime in the next few weeks and, if you're not, you watch it online. This series is bound to be phenomenal, if today was any indication.

Keeping score -- we do it all the time, and I'm not talking about the Superbowl, kids. I'm talking about relationships. Your spouse, your parents, your siblings, your kids, your exes, your enemies, your friends, your co-workers, and people you pass on the street. That's what this series is about. We keep score constantly, and what a heavy load it is, and how we need to be instigators of reconciliation. Oh, my, doesn't that sound simple?

Anyone with half a brain knows it isn't.

II Corinthians 5:18 -- All this is from God, who reconciled us to himself through Christ and gave us the ministry of reconciliation: 19 that God was reconciling the world to himself in Christ, not counting people’s sins against them. And he has committed to us the message of reconciliation. 20 We are therefore Christ’s ambassadors, as though God were making his appeal through us.

What does this mean, then? It means, we have a level playing field. There's no home-field advantage. We're all the same. You, me, our brothers and sisters, people we love, and people we hate. We've all hurt other people, and we've all been hurt. We've all done things we're not proud of, and we've had things done to us that would make your skin crawl. But it also means that we are called to forgive, no matter how hard that might be, if we want forgiveness ourselves. Or, in another light, we've already been forgiven -- so, how can we not forgive?

But who, in any argument, wants to take the first step? Who wants to admit their own wrongs, knowing full well that the chances of the other person admitting their wrongs is pretty slim or even non-existent? Who, when they're so angry at someone for doing all of this terrible stuff to them, takes the time to think -- but I also must have done something wrong. I'm not innocent in all this. What can I apologize for?

Pride is a difficult thing to overcome. Humility is a difficult thing to grasp, much less hold onto. How can a human, any human, put their selfish desires aside, put their need for justice not just on the backburner but in the trash? How can we bring ourselves to admit defeat? How can we deign to lower ourselves to kiss the feet of the one person who has hurt us more than anyone else? Or to all the people who have hurt us over the course of a lifetime?

Well, how do we do anything in this life? We just do it. A soldier, fighting on the front lines to defend the country. A mother, throwing herself in front of a truck to save her child. A betrayed spouse, granting the betrayer another chance.

We do it because, in the end, what other choice do we have than to do the right thing?

The choice to do the wrong thing.

How often does that work out? Never. That's why they call it 'the wrong thing'.

While I was there, listening to Jason Miller (who, by the way, I think could possibly be both the best speaker and most humble person I've never actually met) talking to me -- TO ME -- from the stage, I thought of at least a dozen different people I thought needed to hear what he was saying. Simultaneously, it occurred to me how often people must listen at church and think of someone else who needs to hear what they're hearing.

But I was hearing it for a reason. None of the other people I was thinking of were there. But I was.

And it occurred to me how many people I need to forgive, against whom I've been harboring at least a modicum of resentment over the years and for many of whom I just have a full-blown disgust. Why? Because of the way they've treated me or my husband or my children. Because of the injustices they've perpetrated. Because of the emotional and even physical torment they've gotten away with in the past.

If I cannot forgive, what good am I? If I harbor this resentment in my heart, how can I counsel anyone else to be good to one another? How can I accept forgiveness if I am unwilling myself to be reconciled to the ones I feel are in violation?

And get yourself to GCC or GCCwired. The message should be up sometime in the next 24 hours. It's an hour out of your life that, believe me, is the best investment you might make this decade.

Stephanie Jean
Posted by SJS at 10:21 AM