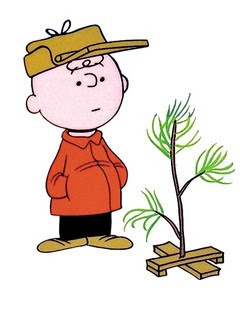 My favorite show to watch every year at this time is A Charlie Brown Christmas. Don't get me wrong, I love How The Grinch Stole Christmas (the cartoon one, not the Jim Carrey movie), and Elf, and Christmas Vacation, and A Christmas Carol, and I'll tolerate It's a Wonderful Life once a year because of my husband's affection for it... but A Charlie Brown Christmas seems to mean the most to me. I still tear up every single time the lights go down and Linus quotes scripture.

I try not to get caught up in the materialism of the holidays. We don't spend a lot (mainly because we don't have a lot to spend), but I really just enjoy spending time with people I love, sitting by a warm fire, drinking hot cocoa, going to church, and listening to Christmas music (as long as it's past Thanksgiving, which it has been for awhile now!)

This year, we did the Christmas show at Elkhart Civic Theatre. It's only the second time we've done it -- the first time, it was still called "A Season's Serenade", but now it's called "Winterlude". I have a solo, which is scary to me because I'm not used to being the only person on stage. It freaks me out. Tomorrow is our last performance, and a lot of family is coming which simultaneously makes me nervous and puts me at ease, if that makes any sense at all.

I'm learning peace. The key to that is acceptance, which I've also been learning. Its strange how it's washed over me recently. Things that used to make me just flare up in anger are rolling off my back. Things that would once make me panic don't seem to have any effect. This is not to say its the norm -- in fact, I had a massive anxiety attack this past week that kept me up half the night in fits of wrenching sobs for absolutely no good reason. But in comparison to the constant anxiety-filled days I had up until recently, one crummy attack ain't nuthin'. (See, I'm even playing fast and loose with my English and not being anal retentive about it. It's a whole new me.)

I'm learning and changing and growing every day. Most of the days, I don't look like it on the outside, but I can certainly feel a change on the inside.

I guess that's the part that really matters, isn't it?