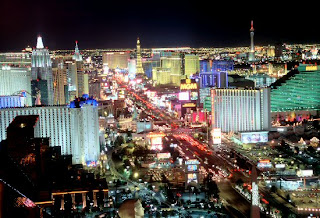 It has been a wonderful week, it has. Why is that, you ask? Because I was in Las Vegas, Nevada, which I lovingly refer to in my head as "home". The weather: 96-105 degrees with 3% humidity each day until today, when it rained (a rare occasion on our trips out here). The week begins with such promise, and ends with that uncomfortable tugging on my heartstrings. I know it won't be long until we're able to move here if, in fact, this is where we're meant to be, but I can't help but be slightly depressed whenever we fly back.

We flew out of O'Hare in Chicago last Friday evening and arrived around midnight Vegas time, got our rental car and drove to Fitzgerald's hotel and casino downtown. Being frequent travelers to Vegas, we feel more like locals, so we bypassed the entire strip by taking I-15 North which is parallel, and we didn't have to fight the traffic or stop at any lights on the way. It's not that we don't love the lights and sounds and crazy nightlife of the city, it's just that when we've spent that long traveling, the only thing we want to do is crash in our hotel bed and sleep, and sleep, and sleep until we wake up on our own to the sunlight peeking in beneath the blinds. We were on the fourth floor which is enough for a pretty view of the city but not so high in the tower that it takes forever in the elevator.

There's always a routine that we establish when we get to wherever we're staying. This time, our stay entitled us to two free breakfasts each day (and they served breakfast all day, which was lovely). We got two eggs, potatoes, toast, and choice of meat, so the first thing we did was walk across Fremont street to get out Dunkin' Donuts coffee, then we brought it to the hotel so we could have it with our free breakfast. Vegas does not frown on your bringing whatever drinks you like into whichever hotel, casino, or restaurant you're at. They're just happy to take whatever money they can get from you. That's the beauty of the city. Well, that and the shininess, and the desert, and the mountains, and the weather.

This time we took a trek to Red Rock Canyon where there is a 13-mile scenic drive, and it was beautiful. Every thirty seconds, the view changed. There were some places where you could drive off and hike if you wanted, but we weren't equipped for that and it was pretty hot even after 5:30pm. We got a few pictures, though, and it was quite a nice little trip.

Also this week, we saw a few shows. "Nunsense", which I was looking forward to, was absolutely terrible. It was at the Hilton in the Shimmer Cabaret room (which, for those of you who don't know, is cool because my alter ego for years in college and after in online RPGs, etc, was Shimmer). The acting was terrible, the timing was no good, the choreography would have been lovely had any/all of the actresses been aware of what it was at the same time. It was definitely not worth half of what we paid to see it. However, we were pleasantly surprised to see that the Community Theatre performance of "Little Shop of Horrors" at the Summerlin Library Performing Arts Center was fantastic! We also saw a season preview of the Las Vegas Little Theatre season in which they had a few actors doing staged readings of scenes of all of their upcoming shows, and that was a lot of fun also. And it was free. I'm big on Free Stuff To Do In Las Vegas.

Also free was the three and a half hour time share presentation for Planet Hollywood Westgate Towers which was only supposed to last one and a half hours. We were also supposed to receive $100 free slot play each, a two-night stay in any of their resorts in the next 18 months, and free tickets to see the Beatle's LOVE Cirque du Soleil show. We paid a $15 each fee for taxes on the tickets, etc. When we checked out, we didn't receive any of those things, and were told that the Beatles show was sold out until Saturday night, so which other show would we like to see. We were livid. So livid, in fact, that I'm going to write a SWL (Strongly Worded Letter) to the company. It wouldn't have been that big of a deal had we not specifically said we would NOT do this unless we got those particular tickets, and they were supposedly booked three days in advance... but the worst part was, they were NOT sold out. We went right down to the ticket place the next day and bought tickets for Friday, so we saw the show. I'll be including a copy of our credit card receipt in the SWL so they can reimburse us. Jerkfaces. DO NOT BUY A TIME SHARE WITH ANY WESTGATE PROPERTY AND PLEASE TELL YOUR FRIENDS! (I would make that a gigantic, annoying font, but I'm pretty sure the all-caps makes the point I wanted just fine.)

I also got to spend time with my oldest friend, the best friend I've had since 2nd grade, Christy! She and I still have such a great time together all these years later, and I appreciate her so much. We hung out a few times where she bartends, the Motor City Cafe, and we also went to dinner once at our hotel, hung out for awhile on Fremont Street, had Yama Sushi (all you can eat) with her and her husband, Kei (although I did not in any way, shape, or form consume sushi, I just had a nice water), and we saw a couple of bands for free at a local arts place (Artifice) and the Double Down Saloon. Have I mentioned how much I love it here?

If that's not enough, even the airport is lovely. Slot machines abound, and there is free wi-fi, not the kind that you have to pay for by the day, or have a membership to at the airports, or whatever. The bummer is that our plane is going to be leaving an hour later than scheduled, so we have to sit here for three hours instead of two. Meh. At least it's more time in Las Vegas!

The worst part about leaving is that 'real life' starts up once again. Work on Monday, kids start school this week, cleaning the house, doing the laundry, waking up at stupid hours with the dogs because they randomly decide they have to pee for no good reason, or they have to rendezvous with a rabbit under the deck. That sort of thing.

I have gotten a good deal of writing done on the novel this week, though. I'm on page 139 (still working on 400, for good measure...) My idea is branching out a bit, and something happened in the story I wasn't quite prepared for. But something super-cool also happened this week: I saw one of my characters in real life. I'm not joking. This guy at our hotel was working a booth next to the restaurant where we've been having breakfast, and he looked precisely like the description of one of the main characters in my book. So much so that I really wanted to get my picture taken with him, or ask him if he was, by chance, into acting because if it's ever a movie, I wanted to cast him in the role! It was very cool. I felt for a moment like I was in the movie "Stranger than Fiction"! (If you haven't seen it, see it. NOW.)

Well, that's about all I have for now. Things that will be good at home: seeing the kids, the family, the dogs. Sleeping in my own bed with my own pillows and blankets. Making money instead of spending it. That's about it. I'm already planning next year's vacation in the back of my head.

Hope everyone else had a nice week. I know we did!