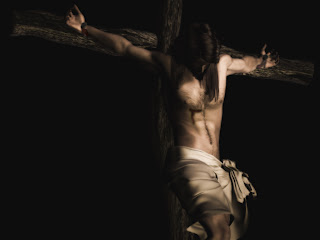 This was a lovely weekend, despite the beginnings of it steeped in wet weather and dreariness. Saturday we went to our Easter services at church at 3pm, which was the earliest service we could attend (which had the added benefit of free cotton candy for the kids! Thanks to GCC for sugaring our daughter up for the ride home :) My sister and her friend Tyler came along, and we had a very enjoyable experience. The music was stellar, as always, but this time they had an Easter choir singing along to a couple of the songs, and it was beautiful.

We came home and had some leftovers from our Mexican Fiesta, then brushed back up and went to a concert at Crossroads Community Church. Steve had gotten tickets from the radio, Pulse FM, this week, so we got to go in with the radio crowd first and got some good seats. We saw Johnny Diaz, 33 Miles, and Newsong. It was a really nice night, and it's been wonderful having all our kids together with us all weekend long. It's a rare occasion that we're together in one place for a few hours, much less the whole weekend! Then we sent them to bed so we could watch "Forgetting Sarah Marshall" which we had not yet seen. Um, very thankful we sent them to bed, that's all I have to say. But that movie was hi-larious!

Today I got up and made a corn casserole, then we went to my parents' house for awhile, hunted mushrooms (found 20!), ate too much as I always tend to do, helped clean up a bit, then came back home and we're watching the second Harry Potter movie on Blu-Ray. Steve wants to watch them all on Blu-Ray (including this last one which we haven't seen yet) and then watch the new one when it comes out, so we have them all fresh in our heads. This is one of his OCDs I can live with... usually I hate re-watching things I've already seen (except in the instance of a movie being so good I can watch it over and over and overandoverandover like Fight Club or Better off Dead).

I cannot stress enough how much I love Alan Rickman's voice (Severus Snape in HP movies, Metatron in Dogma). I think he could probably tell me, in a fifteen minute monologue, how he planned to murder me, and I would still think it was extremely cool that he was speaking.

Oh, have I neglected to talk about Easter thus far? I have. I know. It's hard for me to put into words exactly how I feel. I spent so much of my life celebrating the fact that I got to find eggs, and get a basket full of candy, and wear a lacy dress and a hat to church, and it was all good, don't get me wrong. I still like bunnies, and candy, and eggs, and lacy dresses. But as many times as I heard the story when I was a little girl, it didn't mean a darn thing to me personally, until I was 27 years old.

Believe me, I could give you a ghastly description of how terribly I had messed up my life to that point, what horrendous sins I'd committed, how badly I'd hurt people in my life that I really cared about. I could write a book on the awful person I'd become. I could astound you with my thoughts on God, and Jesus, and the uselessness of it all when I was 27 years old. I had spent at least 10 years of my life far from being a believer. But one night, when my entire chaotic mess of a life came to a climax, I found myself on my knees, sobbing, and begging God to save me, forgive me, change me, fix my life because I COULD NOT DO IT MYSELF.

You know, I used to make fun of people when they said they were 'saved'. I thought, how can you possibly, all of a sudden, change your way of thinking? What could possibly bring you from one side to the other in a fraction of a second? I'd roll my eyes, thinking they were freaks, liars, wishers, dreamers, fools, fill in the blank.

But in that moment, on my knees, pouring the guts of my soul onto the floor and giving up, realizing that I had made a mess of things for 27 years and that there was only one thing that would give me a fresh start to the new life that I needed to have RIGHT THEN because I could not take any more of who and what I had become -- in that moment, in a flash, in a fraction of a second,

They're covered because God, in His Infinite Wisdom, knew I would fail. He knew we all would. God, with His Infinite Compassion, sent his Son to die in my place. Jesus came down from His throne, gave up everything, to take on flesh and live life as a human. He lived sinlessly, but he became the embodiment of all of our sin. He was mocked, tortured, and crucified. He died, was entombed, and rose again - all of this so that we would have a second chance. He, the only one who was worthy, died for all of us who are not -- so that we, under His blood, would become worthy.

When I'm standing there, at the very end, if I'm asked, "What makes you think you're a part of the Kingdom of God?" I have one answer.

That's better than the biggest basket of candy any bunny has ever delivered.