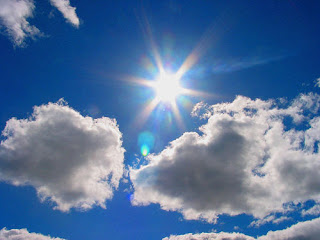 Today is the 100th day of the year. That occurred to me as I read my daily devotional, because it's not listed by what day (April 10th) it's listed by what number reading it is (100). Which means that I've had to wait a hundred days this year (not including how long I had to wait at the end of last year) for a single day of awesome weather. But man, was it worth it. When I finally dragged myself out of bed sometime after noon to make an egg-white and Italian veggie omelet for my husband, I was astonished at the glow coming in from the windows, and the general temperature of the house. I shut off the heat, opened a few windows, and soon realized that it was going to overpower me with warmth that way, so I shut them again. It wasn't long after that that my husband turned on the air conditioning. So begin the thermostat wars of 2011. We can never agree on the air temperature of the house. I would be happy with 70 degrees all year long, but for some reason it's set for 68 in the summer and 72 in the winter. For the record, I'd also be happy with no A/C, just using fans all summer with the windows open, but apparently that's not an option when we have central air. This comes from growing up in a house that never had central air (still doesn't) and never even had an air conditioning unit while I lived there, unless they got it near the end of my teenage years and I just don't recall it happening. I have a deep love of fresh air and cricket noises, so I'm pretty happy with the windows open. Still, it's not gonna happen. I lose this war every year. I probably won't even attempt to battle this year. I know, that doesn't sound like me, does it? I'm getting old.

No, seriously. The grey hairs are multiplying. I'm not just adding a few here and there like I have for the last several years. I can count a great number of them right now. I'm not sure what to do. Let it go grey? Dye it? Pull them out until I'm bald? I don't want to have to start paying to have it dyed on a regular basis, or have my roots done, or whatever. (However, now that I think about it, the two women I know that dye their hair black most of the time are both pretty fertile, so maybe there's something about black hair dye that might get me pregnant...) I keep thinking I should go drastic and hack a bunch of it off and bleach it blonde. Also never gonna happen, but it's a nice thought, if I had some guts. My sister dyes her hair on a bi-weekly basis. It's been red/orange/yellow at the same time, brown, blonde, super blonde and blue, black, purple, green, purple AND green AND black... and I can't even muster the courage to put a nice rinse on mine. I dyed it permanently red once, which was a dumb, dumb mistake because I did it for the wrong reasons and it bit me in the butt. I also dyed some of it purple once, which also bit me in the butt because it wasn't purple when it dried, it was pink and we all know my feelings on pink. So I'm just a failure at hair-dying. I know my sister would dye it for me in a heartbeat if I asked her to, and would probably do a great job since she's getting ready to study to be a cosmetologist... but again, I'm a big fat chicken. With grey hair. Grumble.

The boys are still not back from their trip. They should be pretty soon, I should hope. They came in fourth at the show choir Finale Nationals in New York City, and I might add that they did one of the best performances I have ever seen. Their vocals were excellent, their choreography was sharp, and I was so proud of both of them. We got to watch the live streaming video online, and there were some really good close-ups of both the boys. I can't wait for them to be home safely, though, and have our whole family back together under one roof. What with Aria gone the first half of the week, and the boys the second half, plus all of them spending the night at some friends' houses before/after their trips, it's been strange around here. The dogs are beside themselves with confusion every time someone comes in or out of the house!

Back to work tomorrow. I'll attempt to gather some gumption to get me through the week. This was certainly a wonderful weekend, though -- good food, good rest, good times. I could use a month off!