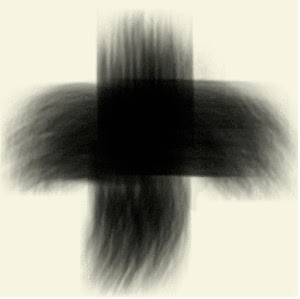 Fondly, I recall when people used to ask me what I'm giving up for Lent. Sometimes I would say, "Hope". Sometimes I would say, "Relinquishing bad habits". Then came the efforts to actually attempt sacrificing something. One year I tried to give up caffeine. One year it was chocolate. One year it was Mountain Dew. None of these ever actually 'taught' me anything about sacrifice, because I was never planning to do without them for the rest of my life, all I could do was count down the 40 days until I could have them again, then binge. Nor did I ever make it 40 days, just FYI. A couple of weeks, is all.

This year I'm not really 'giving up' anything. I am, however, trying with all my heart to become the person that I feel God intended for me to be. I'm beginning Lent by fasting a short spell, just to gain some clarity of mind and some focus. I cleaned the entire house from top to bottom, dusting included, to get a cleaner and clearer sense of my surroundings. I'm not forcing anything upon myself that would seem like a chore... not resigning myself to a certain amount of devotional time or prayer time or any of that nonsense, because then it would defeat the purpose. I'm just trying very hard to locate my center.

I often wonder if I'm off-balance both physically and emotionally. I tilt my head to the side at an alarming angle while I'm driving, or riding in a car, and sometimes sitting and watching television. I can't walk a straight line, nor can I do any sort of choreography. Line dancing is difficult for me. My balance is pathetic. But my life-balance seems to have been pretty pathetic most of my life as well. I live inside of this big bubble of stress that feels constantly like it's about to pop. And I think that's because I center myself around outside influences rather than locating God inside of my spirit and focusing on His path for me. I'm so busy running around trying to take care of the life that "I" have put together: the family I have, the job I have, the pets I have, the house I have, the financial struggles I have, the I I I I I I I I... I get sick of hearing that letter, don't you?

Where's the perspective, here? As an outsider looking in, I wonder what people think when they see me. Do I look like I have it all under control? Because I most certainly do not. Most of the time I feel like the world is crumbling right beneath my feet, and I am powerless to do anything about it. And that's because that's the case. No matter how big or bad the problem is, or how facile and minute it might be, I'm still powerless to control it. Whether it's an infertility issue, or head lice, or dog poo on the floor again... I have nothing to do with the problem or the solution.

If I can pinpoint this truth right here and now, why can't I have the presence of mind to seek that central locus and just breathe when times are tough? Why is it that I must run around like the cliche decapitated chicken trying to solve everything instead of putting things on hold long enough to figure out what God wants me to do about them?

I often wonder if He thinks that when He's watching... but honestly, I think He just giggles a little bit.

My oldest son wrote a wonderful note on his Facebook about love, something I never thought I'd see from him. It made me think about how I act and react towards the ones I love the most. As many (or even most) people are, I feel less tolerant, less patient, and more demanding around those I love the most. Why is this? I suppose that, in part, it is because I know they are the ones who will love me no matter what, but rationalization doesn't work here. God said we should love others as ourselves, and that includes all others. How often have I complained to my husband about how something he did or said has hurt me, but I'll treat him in the same manner that he treats me without a second thought? How often will I yell at my kids for doing something that I wouldn't yell at a guest in my house for doing?

I need to give grace as freely as I've received it. Peace, therefore, should follow.