What if the Groundhog Disappears in a Snowdrift? 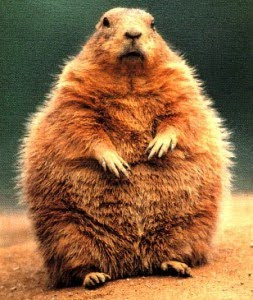 Here we are, February 2nd, amidst a massive pile of snow. Had I any tolerance for the cold, I would've bundled up and tunneled through my back yard after Steve shoveled the porch path for the dogs. It looks really fun... there are about four feet of snow on each side of the path because of the drifts! I'm pretty sure I could dig some snow out, enough for the little dog to tunnel through. As much as he likes to burrow, you'd think he'd be in Heaven. Then I remember he's a total wussy when it comes to rain or snow. He's a big fan of being warm. Hence the snoring lump on my feet as I type this.

As you might have read yesterday, we had a snow day today. Our place of employment was closed, and Elkhart was declared to be in a "State of Emergency" so you could actually get ticketed if you were randomly driving with no plow on your vehicle. We left the house to try the bank, only to find out it was closed. The hardware store downtown in Middlebury was open, so we got a snow brush for Zach (who, despite being told several times he needs one in the last week or so, still had not purchased his own), and we needed salt for our water softener and a furnace filter. My husband is quite methodical about the furnace filter, which is great. This one is a 90-day one so that'll save him a couple of trips down to the basement.

We do need more softener salt. Apparently we go through a tremendous amount of water in this house, and I really wish we would consume less. With five showers each day, an average of six loads of laundry a week, and a dishwasher full every night, plus toilet-flushing and hand-washing... well, if water cost as much as gas does right now, we'd be have smelly clothes and smelly bodies, let me tell you. I just don't know how to get the kids to understand the concept of reducing the usage. I realize it doesn't make sense, as water should be free... but our water bill has been between $75 and $125 every month, and I just feel like that's ridiculous. I remember taking showers in the Upper Peninsula when we'd deer hunt -- we had five minutes. One second more, and someone would shut the water valve off. If you didn't rinse enough, that was your own problem.

We watched "'Salem's Lot" today. I cannot believe how totally campy that movie was! I'm sure I watched it when I was very young, because I remembered bits and pieces. I'm also sure that the book must have been better. We also watched the rest of the first season of "V" (the new one, not the old mini-series... "mouuuuuuuuusyyyyy...."), and we got to watch Jeopardy together which is always nice. I'm catching up on my reading here and there, my writing here and there, and trying to think of a genius way to sell more of these Kindle books. I'm thinking of doing a short story each week at like, $2.99 or something, and just uploading and publishing like crazy. The more I have on there, the more chances I have to sell.

A bad thing happened today, though, too. My friend Frances, for whom I have cleaned house for about nine years now, called to tell me that her son had passed away. He was in his forties, lived alone, and had sleep apnea which is what they think happened. The viewing is next Monday and I'm going to try to be there. She and her husband are such wonderful people. If you could please keep Frances and Weldon in your prayers, that would be greatly appreciated.

On a lighter note, I had a great talk with my sister-in-law Beth this morning, and I just adore her. She always makes me laugh! I keep trying to get her and Dan to go to Vegas and elope, since it's soooooo much easier than planning a big wedding. I might just kidnap them and throw them on a plane. But since we have to go through so many hoops just to get on a plane these days, that probably won't work, either.

Back to 'real life', at least somewhat, tomorrow. The kids already have a two-hour delay, and I'm not sure if my car will make it out of our subdivision to go clean some houses, but I hope so because I could sure use the money! I'm thinking of putting out my housecleaning cards again and just taking a bunch of jobs whenever I can get them, to save up for when I inevitably lose more hours at the coffee shop.

Hope everyone stayed safe during the storm, and dug themselves out properly! Stay warm, stay inside if you can, and drink hot cocoa with marshmallows. (That last one is an order.)