I know I mentioned this yesterday, but it bears repeating: I love sleeping in. I think I love it as much as my husband loves reading. Don't get me wrong, I love reading, too. I read more last year than I have in a decade, but I'm working so much lately it seems like all I want to do when I'm not at work is sleep, sleep, sleep. It makes me smile just thinking about it, which makes me wonder if I'm in love with sleep. You know that goofy feeling you get in the pit of your stomach when you're first in love with someone? You get a little dizzy when you're not with them? You smile a hundred times an hour just wishing you could be with them? Yep. I'm in love with sleep. Don't worry, soon I'll be blaming sleep for all of my problems, like lack of enthusiasm or ambition or accomplishments, and telling sleep that it's greedy and selfish and territorial and won't let me be with any of my friends or family. I have enough foresight to know that this love affair won't last forever, but for now I just want to revel in it on the weekends, thank you. 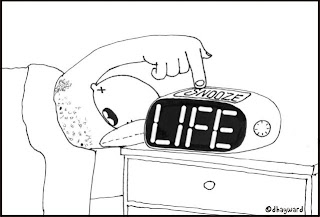 Joking aside, however, I am feeling the urge to get out my best friend 'fresh pad of paper' and start writing to-do lists. I haven't gotten around to that yet this year, but there are things in and out of the house that need to be accomplished, errands that need to be run, projects waiting to be started, and all of that needs to begin on a fresh pad of paper. I write lists. I write lists of lists that I need to write, that's how much of a list-maker I am. Part of it is so I can plan ahead, but another part of it is that I need that small sense of accomplishment by crossing something off the list to boost me into the next level of ambition. Lately, I've felt an utter lack of ambition and I don't want to allow myself to wallow in that rut. I haven't been able to lose any weight because each time I try, I fall right back into the "I'm going to drink this glass of Mountain Dew and eat this bag of tortilla chips with this jar of cheese for dinner" pit. I haven't been able to properly clean the house because I get stuck on how much laundry there is to do on an almost daily basis. I haven't been able to save hardly any money towards anything because of the debt that's been accumulating since last year. I avoided resolutions this year in January... maybe I shouldn't have. Maybe I should've embraced it as another list to get my butt in gear.

I wrote a book, I put it up online, and I haven't done anything to try and market it besides posting it on Facebook over and over. I've sold 16 copies, which isn't terrible, but I was certainly hoping I'd sell much more than that in the first month. Hoping and lack of ambition will get me 16 copies. Hoping and lighting a fire under my butt will get me a few more. Jumping up because of the fire and actually doing something about it might sell enough for me to gain the ambition to keep trying. I have this habit of starting out great and then slowing down and doing something else when it's not working out the way I want it to, instead of honing my focus and pouring in the amount of effort necessary to make something really happen. It's like with this article-writing thing. I'm writing for two magazines and a newspaper right now, but I need to put together a resume and send some sample articles to big name magazines, whether they're women's magazines, parenting magazines, or whatever. I just need to do it. But I get so overwhelmed by all of the things that I have to do, that this stuff never gets done. Unless I start writing lists.

You know what helps with lists? Coffee.

Stephanie Jean
Posted by SJS at 7:59 AM