Can I just tell you how excited I am that Dana Carvey is hosting Saturday Night Live? Because, in my estimation (and as his opening monologue might have told you) SNL was the best when he was on it! So tonight's been worth staying awake for, even though I feel like a zombie. Oh, and Linkin Park is just awesome. There's a book from our church (at least I think it's one from ours...) that has a chapter called, "When Linkin Park Sings, God Speaks".

Oh, and SPEAKING of our church (can you see I'm in the middle of a total stream of consciousness here?) I've been going to Granger Community Church for almost seven years now, but had today been my first day, they had me from 'hello'. I walked in, I sat down, and when the 'prelude' music started playing, it was THE CURE. My favorite band ever. I'm pretty sure I was the most excited person there, but even my son recognized it because he knows how much I love The Cure. The service was pretty good, too, of course. They usually post the services early in the week online, so you might want to check out the link this week and watch. THE CURE, I tell you! My cup truly runneth over.

Well, sort of. The flat tire on my car that we drove around trying to get fixed sort of put a damper on my day, but only because the roads really stunk and it took a long time to attempt to get something done about it with no real accomplishment in the end. First, I filled the tire completely with air and drove to Discount Tire in Dunlap, where the tire was half flat when I arrived. Instead of assisting me in any way with my problem, the kid at the counter proceeded to try and sell me four brand new tires, and then two brand new tires, while telling me they had no used tires in stock which is baloney, because I've never been to a Discount Tire that didn't have used tires in stock. I asked if he could call another Discount Tire, and he seemed reluctant, then ticked off when he actually did call. He also said they couldn't patch the tire because the tires needed to be replaced. I question the veracity of his statements. I then tried two Walmarts, and Monteith Tire was closed as was Tire Star (which was my first choice, by the way). In the end, after driving all over Timbuktu, with my wonderfully patient husband following me to each place to see that I got there safely, I parked it at the Tire Star (which apparently just recently changed their hours and are no longer open on Saturdays, sadly) and left a note and the keys, but that means I have to ride in with Steve again on Monday to work. Won't be too bad since I get to clock back out at 1. Hopefully, the tire will be either fixed or replaced by the time I get home.

Is there some way to remove a small, sleeping dog from the crevice between my husband and myself? He weighs 14 pounds, but I'm positive that while he's asleep his weight quadruples, so he's basically a 56 pound wet noodle. Then he begins snoring, then he begins dreaming, then he begins twitching. Which is precisely what he's doing right now. And for those of you who say that the dog should not be sleeping in the bed, I cannot say that I disagree with you. However, if he's not sleeping in the bed, he will continue to jump onto the bed regardless of how many times you shove him off the bed. And if you put him outside the door, he will scratch at the door or throw himself at it until you open it, or it opens itself. If you put him in another room or a cage, he will whine and bark until you let him out. Therefore, he sleeps in our bed. A 56 pound wet noodle lying between my husband and I as we sleep is better than a 14 pound whining, scratching dog which we would continue to hear because we CAN'T sleep.

Is it just me, or do Dana Carvey and Mike Myers look much older while Jon Lovitz looks exactly the same?

So, tomorrow the Superbowl that I don't really care about at all. If I were to be forced at gunpoint to root for one of the two teams, it would be the Packers ONLY BECAUSE I HAVE FAMILY IN WISCONSIN. I have no ties to the Steelers and despise Ruthless-berger. But you will not, in any way, hear me say such things as "Go Pack Go". The closest thing you might hear to me actually rooting for them is to say something positive about a dairy product. 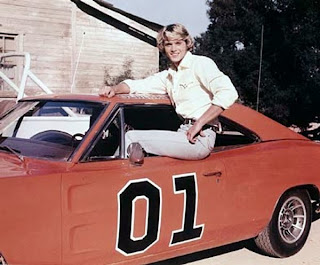 We are now at the point in the evening where the infomercials have begun. I'm watching John Schneider, alias BO DUKE from the Dukes of Hazzard, plugging old school country music CDs. And I must admit, I want to buy them. Not just because my old flame is plugging them, but because this is the country music I actually enjoyed. Crystal Gale, Conway Twitty, Dolly Parton, Waylon Jennings. "Country music speaks to us about what's really important: love and relationships" is what Bo Duke just said. Ahhh, such truths. I must kick back and watch this cheese. (That was not a cheer for the Packers...)

Have a fine evening, and gear up for the commercials tomorrow -- they're bound to be better than the game.