A Smorgasboard of Information

Today was somewhat of a roller coaster for many people in our family. While I was cleaning my first house of the day, I got a call from my husband saying our oldest son had been in his first car accident in his pretty yellow new-to-him car that he's only had for about two weeks. Attempting not to panic, I waited for more information because if I spoke, the gutteral "nooooooooooo" that would escape my lips would accomplish nothing. Everyone was all right. Apparently he slid on the ice, and the girl behind him wound up totaling the front of her vehicle on the guard rail trying to miss him. And thank God she did, because they could both have been hurt badly by the impact. However, again thanking God, both of them are safe and the insurance won't have to be notified because Zachary had no actual impact, he ended up just being a witness. 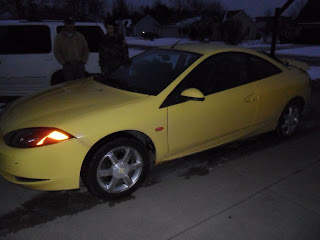 When I arrived home after cleaning my second house today and braving the ridiculous roads (a 40 minute drive became about an hour and 20 minutes on the way there and the way back, first because of bad visibility in the snow, and last because of icy roads), I found out that my father-in-law was at the emergency room. He has a case of cellulitis in his foot, which is basically an internal staph infection (if you go back in the archives, you'll see this is the same thing my director for RENT had back in July or August). They gave him some antibiotics and sent him home, but he has to keep a careful watch on it to be sure it doesn't flare up, or it could be dangerous.

And finally, my brother's family lost their kitty to internal injuries from a dog attack. My niece was also bitten on her hand, and swelled up pretty badly. That's a traumatic thing. I know how very much I love our dogs, even when they drive me batty. They're family, and if something happened to one of them I would be devastated. My heart goes out to the Stowes :(

I have been writing some articles the last couple of days for Family Magazine of Michiana and Mi Child. I also received a copy of the Good Neighbor News for January, and read my article in there. I have to think of a title for my space in the newspaper and have my February article in to her by the last week of January as well. I'm having a brain freeze as to what to call the space. I'm seriously considering "Salisbury's Stake". Yeah. I'm a dork.

As of 10:00pm, I've sold five books on Kindle. Now, if only I could keep up that average each day for the rest of the year...

One more day of work this week! I am so excited about tomorrow, because P.S. Dump Your Boyfriend is going to be at Bella Luna. (For those of you who are not local, I just said something that made zero sense to you.) P.S. is a local cover band that's been kickin' it in Michiana for at least 20 years, as far as I can remember, and I love watching the perform. And dancing. I get to dance tomorrow, yay! Bella Luna is a little bar about three blocks from our house. This is incredible because P.S. usually takes up a gigantic amount of space with their following -- Bella Luna is pretttty small. So it should be fun to see how many people can stuff themselves into it! We're going right after work to ensure that we have a place to sit. When I'm not shaking my groove thang, that is. Walking distance from our house... always a plus, just in case we can't agree on which of us is going to be the designated driver.

Here's hoping the weekend is better to my family than the week was... be careful on the ice and snow out there, and bundle up warm! Did you know that mittens keep your hands warmer than gloves because of the body heat generated when your fingers are together as opposed to being separated? Just a little tip from your friendly neighborhood writer-mom. (See how that kinda sounded like 'Spiderman' but not really? I should stop writing and go to sleep while I'm ahead...)