Oh, man, am I weary. I'm sitting on the sofa at my wonderful in-laws' house, kicking back on the wireless and typing for a little bit before the last bits of my consciousness drain away. I'm attempting to watch the BCS National Championship game, but since it's comprised of two teams that I really don't care about, I'm not paying too much attention. I have a lot of other things on my mind.

Our oldest son had his winter band concert tonight. He was in the percussion ensemble piece at the beginning, and the four symphonic band pieces at the end. One of them, called "Trolls", made me giggle because it was the theme song for a video game that I was obsessed with when I was younger, on my Commodore 64, called "Trolls and Tribulations" (if my mom is reading this right now, she just began humming the music!) 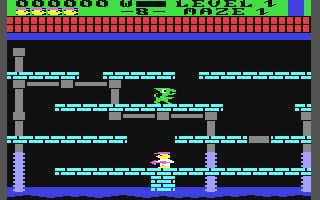 It was a very nice concert, but sadly, not the most pleasant of listening experiences. I'm not sure why I continue to be taken aback at the audacity of concert-goers. Well, anywhere-goers. I feel there are a certain set of rules when you're watching a performance of any kind -- unspoken rules -- but I guess in this day and age, they should probably be spoken because a lot of people must have no idea. Turn your cell phone off before the concert begins, preferably before you walk into the auditorium. When someone is speaking on stage, or when music is being performed, stop talking. And if you sit behind me and you are chewing gum, have the decency to at least close your mouth while you chew. Do not allow your six-year-old child to join with another six-year-old child in playing 'maypole' with the railing in the middle of the steps leading down toward the stage. Do not continually crinkle and tap the paper program you were given when you walked in. That is to keep track of what piece you are watching them perform on the stage. You know, the stage? That large, flat lighted area directly up front where all the performers are? The reason you are at the concert? That stage. These rules, unspoken as they are, seem like a lot of common sense to me. Unfortunately, common sense is pretty uncommon these days.

Tomorrow I have a meeting with Kerri White, who is the editor-in-chief for Mi Child and Family magazine of Michiana. My first article was published in the January issue of Family, and she has slated my next two articles for Family and Mi Child in February. This will be the first time we will meet face-to-face. I feel very honored that she's put so much faith in me right away, and has allowed me to write so much for her already. I'm afraid of being The Wizard of Oz -- once she sees the real me, up close and personal, she might be disappointed! (Pay no attention to the girl behind the counter with the espresso covering her jeans...)

So, let's go through the day together. I woke up at 4:05 this morning, to my husband's alarm going off for the second time (I know it went off at 4 because that's what it was set for, but apparently I slept through that one.) I threatened his life last night if he let it go off several times because I was getting up at 4:30, and if it goes off every five minutes before that, then I get no sleep. He lovingly removed himself from the bed at 4:05 and went to sleep on the couch. I got up at 4:30 and walked with my blurry eyes in the dark toward the bathroom. I went to turn on the light switch to find my husband already standing there, and my heart went "GARRGHGHGHHH!!!!" and I was promptly wide awake. We drove separately to work since we're never sure what time we're both going to get to leave, and he showed me the ropes of opening by myself. I adore my husband, with all his idiosynchrasies, his little obsessive-compulsive ways. I watched the very specific way he did everything and tried not to do it differently, even though I have very specific ways I like to do things, too. That's not what I wanted, I wanted to do what he wanted me to do (no matter how difficult that is for me because of my personality). I didn't wholly succeed, but I did my best.

After he left to go shopping, Laura and Ashley came in. Ashley used to work with me, and she is awesome, and I'm so glad she's coming back even though we won't really be working together. She'll be Saturday Girl. It was fun getting back into the groove together, and she did a great job. Somewhere around 1:30, our coffee grinders simultaneously stopped working for no good reason. We tried everything to fix them, to no avail. I tried the breakers, all were fine. I went downstairs to find the other breakers, one of which was tripped, and I moved it back and forth several times, and it still didn't work. We decided to give up and wait for Steve, since he's well-known for fixing something in ten seconds that the rest of us have spent an hour and a half working on. We offered to make an Americano for anyone who wanted coffee that wasn't our flavored or decaf coffee, since we'd run out of both the dark and the house at that point. Once Steve came back with the groceries, he walked downstairs to the breaker that I'd tried several times to fix, and, in about ten seconds, fixed it. See?

I came home from work, talked to the insurance lady about Zachary's car insurance (which, knock on wood, isn't bad for someone his age). Then I made myself some leftovers and sat down with THE REMOTE CONTROL in front of the television in the living room with no distractions and watched whatever I wanted on the Netflix Instant Play through the Wii. I chose: The State, one of my favorite sketch comedy shows from MTV back in the early nineties. I loved that show, and it was even funnier watching it now than it was back then. I watched two episodes of it, and would've watched more if the kids hadn't come home. Pesky childrenz. I was ready for a nap, though, so I skedaddled off to the bedroom, read a tiny bit, and zonked out for about a half hour. Then I got dressed and went to the band concert, and now we're all caught up. I feel uninteresting, and for that I apologize. But hey, you're the one reading this! :P

My brother has started up a new band, Red Hot Voodoo Revue. I'm looking forward to seeing them when they start playing out. He posted some of their practice online and it's pretty cool. (Or, as my son would say, 'legit' -- I think I might ground him from that word, he uses it so often...)

Time for getting to some 'real' writing, for lack of a better term. I have an article to write for the Good Neighbor News' February issue, and I haven't thought up a good topic yet. Brainstorming time!

Let's see if I can open all by myself tomorrow without incident... wish me luck!