A Conversation with Dog

The following is a transcript of the conversation I had with my husky, Nikita, this morning: 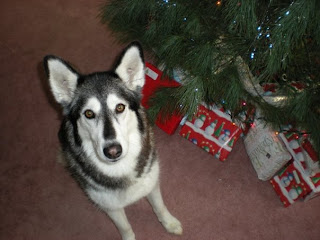 Nikita: Mom. I NEED to go outside. I NEED to be in the snow, Mom. MOM?

Me: Just hang on.

Me: I'm putting my robe on, can't you see? Just chill. Move away from the door. I can't open it when you're in front of it.

Nikita: YES! We're going out of the first door. I will lead the way to the Outside Door. Are you coming? I'm out here. C'mon! I'm excited. Snow, snow, snow-de-snow! Oh, man. This is awesome. I can't wait.

So much for sleeping in today. Nikita wasn't the first thing that woke me up. But last night was fun. We went to Bella Luna around 6:30 and sat at the bar so we could have good seats for when the band started (three hours later). We had dinner, watched some basketball, talked, and then P.S. played three sets, finishing a little before 2a.m. I even got to dance to two songs with Steve, and neither of them were The Humpty Dance which is the only song he will usually dance to while sober. When we got home, our daughter was still awake watching Heroes in the living room because she couldn't sleep. It's 10a.m. right now and she's sleeping just fine right now! Haha! Wish I was.

I weighed in this morning and sadly lost no weight this week. At least I didn't gain anything. But, truth be told, I really wasn't trying yet. I'm still drinking pop and still eating the same. I bought some Slim Fasts last week and haven't done that yet. Maybe I'll get around to that this week. When I diet, I usually do like, oatmeal or cream of wheat for breakfast because it keeps me full for a long time, then a Slim-Fast for lunch and a smaller dinner than normal. I also stop drinking pop because the carbonation makes people retain water. I can lose about five or six pounds in a week when I do that. It's just a matter of actually doing that. It might be easier to just cut off an arm, that's gotta be six pounds or so.

Aria wrote a blog about her brothers last night. I feel for her. She really looks up to them, and they don't pay much attention to her unless they think she's annoying them. It's hard to get them (brothers in general) to pay attention to these things at that age. It's not that they're bad kids, they are just teenage boys and are involved with their own lives. She is younger, and wants to be a part of their lives as well. It was the same with my brother and me when we were younger, and I told her that. We have almost seven years between us, so I was even more annoying to him probably than she is to her brothers. But as we got older and both became adults, we held conversations, we talked, we listened, we started to have a few things in common. It'll get better for her and her brothers. Besides, we know our brothers love us even if they're not demonstrative about it as teenagers or as adults. No siblings ever have everything in common, or spend a ton of time together, or want to be around each other all the time. Sisters are more likely to be close to sisters, and brothers to brothers. But brothers and sisters have a love and connection more often than they realize, and when the chips are down, those boys would always be there for their sister to protect her if someone were trying to harm her. It's just the day-to-day struggles of being three teenagers under the same roof that get to us all sometimes!

Can I just say how happy I am that God blessed us with such a wonderful thing as coffee? Sadly, I've been typing so long that it's gotten cold and I have to leave my comfy bed to microwave it. Looking outside, I kind of feel like I'm in an igloo right now.

Stay safe on these roads, and if you live somewhere warm, or tropical... well, I dislike you greatly at the moment.

Stephanie Jean
Posted by SJS at 6:53 AM