I am in the bedroom. Coffee is in the kitchen. Coffee cup next to me is empty. Getting up is not on my list of things to do in the near future. Only because I've confined myself to this bed until I finish writing my blog and posting it to Facebook, and reading portions of each of the books that I'm reading. In the hour I've been in bed, I've accomplished the following things: 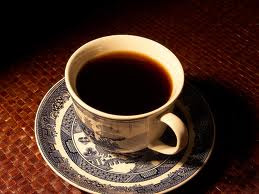 It's not like I haven't accomplished anything yet today. I've worked out with the Wii, weighed myself, had a good talk with my oldest son, made breakfast sandwiches for my daughter and husband and self, let the dogs out, made coffee, folded the blankets in the living room, wrote to my cousin and mailed the letters with some bills, brought the newspaper in, etc. I'm just very unfocused right now, and I dislike this greatly.

I'm pretty fed up with my mortgage company. They're hosing me on escrow and there's not much I can do about it. This is the house that I still own in Elkhart, on which there is a land contract so someone else is living there and paying the mortgage to me, and I, in turn, pass it on to the mortgage company. (It's somewhat like renting, but I'm making some of the money back that I've sunk into it for years.) The problem is, I just want to get out from underneath the house without losing a bunch of money on it. The kid can't get a traditional mortgage, and I can't get a traditional mortgage on the house we DO live in until he does, because otherwise this would qualify as a second residence and we'd have to have 20% down. (You don't even want to know what 20% down would be. I could buy a brand new car for that much. And if I had that much, I would probably buy a brand new car. Or at least a very decent last year's model still on the lot car.)

This is coupled with how badly business is going at our workplace. The company's not making much money, probably not any money to be honest, and so hours have been cut and changed and maneuvered to save money. My schedule's changed quite a bit and it's making me crabby, even though I appreciate the paycheck. Steve's working crazy numbers of hours because he's on salary, so he's cranky and tired. And we're never sure if we're going to have a job the next week, so that's scary because we both work at the same place. When we're unemployed, we'll be unemployed together. (Can you feel the panic?) So I'm a little... strike that, a LOT... on edge lately. I'm trying very hard not to take it out on anyone, but I fail sometimes miserably.

On the other hand, the ex-wife is being very friendly lately, so that's nice. I would like to maintain a good relationship with her, especially for the kids' sakes, but also because as much as she and I disagree on many issues, I still respect her position as their mother. I will do everything I can for them and love them with my whole heart, but I will never try to take that position away from her. Early on, when we were dating, Steve said that to me and I've always respected it -- he didn't see eye to eye with her on anything, but he was not looking for a mother for his kids because they already had one, he just wanted us to have a really good relationship. This was before I even met the kids, or the ex-wife. And I thought then, and I think now, that my husband is a very, very good man inside for this, and many other reasons.

Even when he's cranky and/or smelly.

Do I really have to stay in bed, or can I get another cup of coffee?

Church tonight! I'm excited about that. I love going to GCC, and I especially love going on Saturday evenings instead of Sunday mornings. I like the first service because it's not completely honed yet, and it's a more raw run without all the tweaks they make in between services. By the fourth one on late Sunday mornings, which is when we'd been going for awhile, I kind of feel like it's not as genuine as the first time around. Not that the message itself is any different, but like any 'performance', it's been changed to fit the audience, if that makes sense. More emphasis on what makes them laugh, or think, or feel something in particular, and less emphasis on the story-lines that didn't fare so well the first time or two. More like entertainment instead of a service. I'm not saying that all of that is really the case, it's just the way I feel. I grew up going to church on Saturdays anyhow, so it feels more comfortable to me to go then instead of on a Sunday morning, even though I know God doesn't care what day you go (or even IF you go, we're loved just the same no matter what we do or don't do).

I'm stuck at 14 books. This is a good number, and I'm happy with it, but it would also be nice to sell 1,000,000 of them, you know? Not that I expect that. Steve wants me to send my book to Oprah, and I appreciate that advice. I know that he's right -- if she were interested, I would be a millionaire. I can't quite put my finger on why that bothers me so much. It's not a fear of rejection, or even of success if that were to actually happen. I don't like Oprah. I don't dislike her, either, but I feel like the country just sort of gloms onto her and waits to find out what she likes so they can like it, or what she dislikes so they can boycott it, or what charity she's passionate about so they can donate to it, instead of thinking for themselves. I want a lot of people to like my book, that's true. But I don't want a lot of people liking it because their guru told them to. I want them to like it on its own merits. Sure, it's not a fantastic book, but I think it's good. Other people think it's good. My heart is in there -- my emotions, my tears, my mistakes, my complete and utter failures. My raw pain. My excitement, my elation. I want people to like it for what it is. I don't want Oprah to read it and say, "Wow -- I like this" and then the rest of the people to like it because Oprah validated my emotions. They're MY emotions, for goodness' sake, they're not a new stock of underwear being inspected by #421 and stamped "good" or "irregular". And on the flip side, I dislike critics because they give a thumbs-up or down, and make or break things sometimes... I don't want Oprah to give it a thumbs-down (or the fourteen people that read it before Oprah even gets a look at it)... thereby demeaning the importance of the stories and such. It might not make a lot of sense to you, but it's how I feel.

I've contacted both the South Bend Tribune and the Elkhart Truth, and I'm planning on contacting the Niles Daily Star to try to solicit some interest in a story about e-publishing, or 'local girl on journey to fulfill dream' or something of that sort.

There is another book I've written that I need to finish editing, and if/when I'm done with that, I want the whole world to read it. It's non-fiction, it's about hypocrisy, and it's something I've felt pressed to write for a long time. It's two years in the making, going on three. I have drafts of it all over my house and computers, and I just want the best possible way to go about putting it into people's hands. My little sister did the cover art for it, and I just need to put some finishing touches on it. I have to stop letting the rest of 'life' get in the way of what I'm meant to be doing. I feel like, if I lose my job, that's God's way of saying, "There... now you have time to do what I want you to do". So, we'll see, won't we?

By the way, I'm getting up to get some coffee before I read the rest of this stuff. I'm letting myself out of this self-confinement. I just have to NOT get distracted by the Wii while I'm out there...

Thanks for listening. I feel better.

Stephanie Jean
Posted by SJS at 10:11 AM